‘Ides Of Trump’ Bombards White House With Postcards, And Here Are The Photos To Prove It (IMAGES) 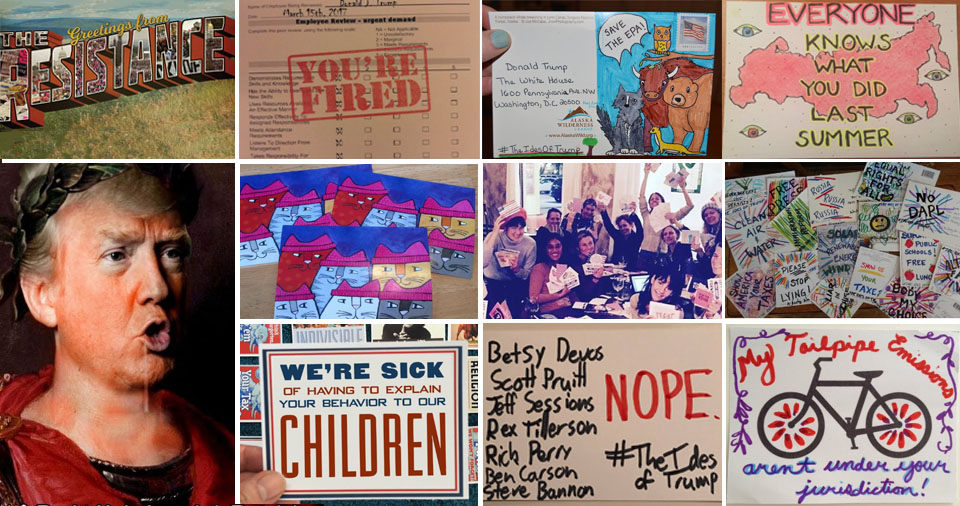 Beware the Ides of Trump. No, this postcard protest won’t put our modern-day Caesar’s life in danger, but this mountain of mail may daunt his ego.

Last month, protesters launched The Ides of Trump Facebook page and invited us to deluge the White House with post cards. On Feb. 9, they posted:

On March 15th, each of us will mail the White House a postcard that publicly expresses our vocal opposition to the new president. And we, in vast numbers, from all corners of the world, will overwhelm Washington with the President’s unpopularity and our negative opinions of his agenda.

But why March 15? As English majors and theater goers may recall, “The Ides of Trump” is a reference to a line from William Shakespeare’s “Julius Caesar,” in which the dictator was warned, “beware the Ides of March.” That’s how the the middle of March — the 15th — was marked on the ancient Roman calendar.

Sure enough, Caesar met his untimely demise at the hands of his enemies in the Roman Senate.

On Wednesday, the day arrived. The GOP’s unsuspecting president Donald Trump tweeted that he’s looking forward to a big rally in Nashville, Tenn.

The Ides of Trump replied that they’re looking forward to the big rally in his mail box.

And @TheIdesOfTrump is looking forward to a big rally in your mailbox @realDonaldTrump! This is just ONE protest party! #resist pic.twitter.com/rw08yLW9EF

And sure enough, across our nation people got busy On March 15 and the weeks leading up to it with postcard parties galore.

Top 39 photos from the “Ides of Trump” postcard protest.

Alas, we can’t stop or even slow Donald Trump’s and the Republican Party’s toxic agenda with postcards. But they do serve as a potent reminder the majority of us oppose his agenda, and his approval ratings are sinking like a stone.

Plus, these amazing photos may at least make you smile.

1. Here, the folks from the Ides of Trump posted a photo from one of their postcard parties on their Facebook page.

2. Meanwhile, some folks in Naples, Fla. got a head start with their postcards protest the week before.

3. This self-described “True Blue activist” got an even earlier start. These colorful, hand-drawn and lettered postcards look great.

4. People from New Jersey have never been known to mince their words. The results from this Ides of Trump postcard party are no exception and some of these postcards are definitely not “family friendly.”

The most prominently featured among these cards informs Donald Trump, “You just suck (and I’m a Republican).”

5. And here’s another conservative who’s turned against Donald Trump and writes, “Dear donald, Thanks. Since your election I’ve met so many nice liberals.”

Had a postcard party and just mailed out almost 500 of these for #IdesOfTrump. This is one of my faves! True! pic.twitter.com/U7joNIVtrH

6. The photo below shows yet another impressive Ides of Trump postcard party effort from Studio City, Calif.

Huddle for Humanity, Studio City, CA did an awesome job in writing 250 postcards!

Posted by Huddle for Humanity on Wednesday, March 15, 2017

7. Many of these missives are works of art that almost seem wasted on the recipients in Donald Trump’s White House.

8.  This would look better in an an art gallery than in a mountainous pile of Donald Trump’s unread mail.

9. But you don’t need to be an artist to make a powerful statement.

10. “You’re fired.” Many Ides of Trump protesters want to turn the tables on the former Apprentice host. But this pink slip looks amazingly authentic.

11. While this example was likely created with a template on the web, it’s still impressive for packing so much into so little space. The creator slams Donald Trump for “Russian ties, the wall, [U.S. Secretary of Education] Betsy DeVos, the Muslim ban, [U.S. Attorney General] Jeff Sessions, not draining the swamp, pu**sy grabbing, incessant tweeting, being a bully, lying all the time, attacking women’s rights, Neil Gorsuch [his Supreme Court nominee], and parading around with that ridiculous spray tan.” Whew!

#IdesOfTrump https://t.co/jev2wnuj2o
This one is a good one. I may get one of each to send to him pic.twitter.com/gfG042UIKL

12. And here’s a terse reminder that Donald Trump and the GOP have no business acting like they have a mandate when they lost the popular vote by 2.8 million.

13. Parents also noted that they’re sick of having to explain Donald Trump’s cruel, churlish, and childish behavior to their children.

14. Speaking of kids, some also had bones to pick with Donald Trump. The following young author of an Ides of Trump postcard starkly accuses the GOP’s president of ruining her birthday, which fell on Inauguration Day.

15. This eight-year-old had a far more scatalogical thought to share.

Made by my 13-year-old son. I don't think I could have named a single cabinet member when I was his age! #IdesOfTrump pic.twitter.com/rmrwOQ4hSA

17. This concerned parent’s postcard serves as a grim reminder of all we stand to lose under Donald Trump’s “unified Republican government.” Like our children’s right to an adequate education…Especially if they are disabled.

In a challenge to U.S. Secretary of Education Secretary Betsy De Vos’ support of vouchers and lack of support for the ADA, this postcard declares: “Requiring my disabled child to sign away her rights under IDEA is NOT educational choice.”

18. Furthermore, Donald Trump vowed that no one would lose their health insurance coverage with the GOP’s “repeal and replace” of Obamacare. But guess what? Of course it’s a lie.

#TheIdesOfTrump #IdesOfTrump #PERSISTENCE DT promised healthcare for all, but Republican plan enriches the 1% on the suffering of the poor. pic.twitter.com/1THtc6EZ2S

19.  Many also honed in on Donald Trump’s and the GOP’s alarming environmental policies and gutting of the EPA.

20. It’s bad enough that the GOP seeks to roll back environmental laws designed to ensure we all have clean air and water, and to fight climate change. But, despite right-wingers supposed support of “states rights,” California’s emissions rules are under attack.

21.The fact that an “alt-right” white supremacist like Steve Bannon helps run the White House is a huge setback to the civil rights movement. This Ides of Trump postcard shows Martin Luther King, Jr. face-palming from beyond the grave.

22-25. Artists also joined the resistance and provided an impressive assortment of online postcards for us to print out and send.

Hey, if U #FF me 4 the shows I work on, consider joining the protest I'm working w – @TheIdesOfTrump! Postcard protest 3/15! #TheIdesOfTrump pic.twitter.com/yIWjecG0Q5

26. A Georgia resident also pointed out that back in the day, Jimmy Carter gave up his peanut farm to avoid any appearance of conflicts of interest.

Yet Donald Trump still refuses to fully divest from his businesses or release his tax returns.

#idesoftrump To Donnie Trumpovich with Love, I want to keep you up-to-date on future plans. #resist pic.twitter.com/zEkiWJfXQJ

30-31. Kellyanne Conway turned out to only be joking about former President Barack Obama spying on Donald Trump’s Microwave. But the Ides of Trump postcard posse wants Trump to know we’re still watching them.

32. Many suspect that Donald Trump’s Steve Bannon’s, Russia’s, ExxonMobil’s, or someone else’s puppet.

Here's my card — off in the mail a few hours late. Bon voyage, little card!

33. And we might be okay with the hole Donald Trump is digging himself into if he weren’t digging us into it too.

34. If this Sharpie-wielding citizen had anything to do with it, Mein Trumpf would be gone.

35. The GOP’s president has vowed to “Make America Great Again,” but we all know his promises are poor currency that’s not worth the paper it’s printed on.

36. Plus, as a child succinctly points out, his “hair is so weird.”

37. “I like to imagine you in jail,” this postcard proclaims.

38. So  here’s wishing Donald Trump a “happy Ides of March.”

Happy #IdesOfMarch … Perhaps someone will catch onto the spirit of the season … you couldn't blame them. #TheResistance #IdesOfTrump pic.twitter.com/nCmUNJ2WtK