I’m not saying the top Democrats cheated. But it sure looks like they did… And it’s not a good look. If they want to win in November, they’d better fix it and fast. Alas, I don’t know if they can.

Because, when it comes to politics, appearances matter. There are no fair and speedy trials on the campaign trail. Just the shrill, shrieking cacophony of Twitter trolls and talking heads on Fox “News” howling, “The Democrats cheated Crazy Bernie… Again.”

You can say, “Our party, our rules.” You can say, “Sanders is not a ‘real’ Democrat.” You can protest that we’re not at all like those awful Republicans… We don’t do bogus “voter fraud” investigations. We don’t enact strict voter photo ID laws to keep people from voting. We’re the good guys. We can calmly explain how the Democratic Party’s leaders don’t technically do anything illegal.

We know how well that goes over. 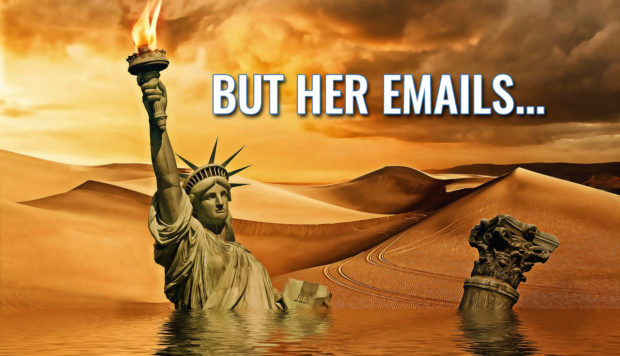 I wish to God the Democratic Party had fought Donald Trump in 2016 or fought Republicans for the past 40 years as hard as they’ve fought Bernie Sanders.

I’m not saying Democrats cheated in Iowa. It just looks that way…

Face it. Something really seemed off about all the contests, starting with Iowa. Of course, I can’t quite prove anything. As The Intercept duly notes, “incompetence isn’t a conspiracy, but it sure looks like one.”

Iowa’s Democratic Party had a new app for tracking all the votes. And it failed miserably. That night, Story County Caucus Secretary Shawn Sebastian got put on hold for over 90 minutes while trying to report the results. And while on live TV with CNN’s Wolf Blitzer, he got cut off!

Never mind that counting heads, adding up the results on paper, and calling them into state party leaders worked just fine for decades. This time, we had to wait 24 days for the final tally. And despite getting fewer votes, Pete Buttigieg somehow “won.” Funny, how the farther right you are, the more these voting mishaps seem to work out in your favor. 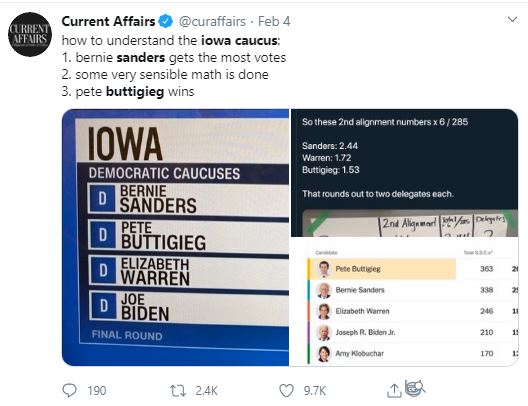 You won’t believe who designed the faulty software. The Los Angeles Times reports it was a “fledgling tech firm run by veterans of Hillary Clinton’s presidential campaign.” Um, yeah. The people behind Clinton’s stunning loss to Donald Trump in 2016. Donald Trump. You’d think they’d feel a deep sense of shame and remorse. You’d think they’d don sackcloth and ashes, crawl under a rock, and stay out of the public eye. You’d think that no one in politics with an ounce of sense would ever engage their services again. If so, you’d be very wrong.

And about Pete Buttigieg “winning”…

First, he managed to deep-six the Iowa Register poll. That’s right. For the first time in 76 years of this venerable tradition, the Iowa Register did not release their results. Why? Because Buttigieg had a complaint. He claimed someone called in to report a poll taker leaving his name out during a phone call.

Then the former mayor of Bend, Indiana gave a “victory speech” that evening… 24 days before the votes were all counted. Finally, after days of waiting, we learned Sanders won the most votes. Yet, somehow, Buttigieg won the most delegates.

But wait. There’s more. The “fledgling tech firm” mentioned above is called  Shadow Inc.  Which claims, “Our mission is to build political power for the progressive movement by developing affordable and easy-to-use tools for teams and budgets of any size.” 🤮 The FEC’s website shows Pete Buttigieg’s campaign paid Shadow, Inc.  $42,500 for “software rights and subscriptions.” File that under, “Things that make you go, hmmm.” 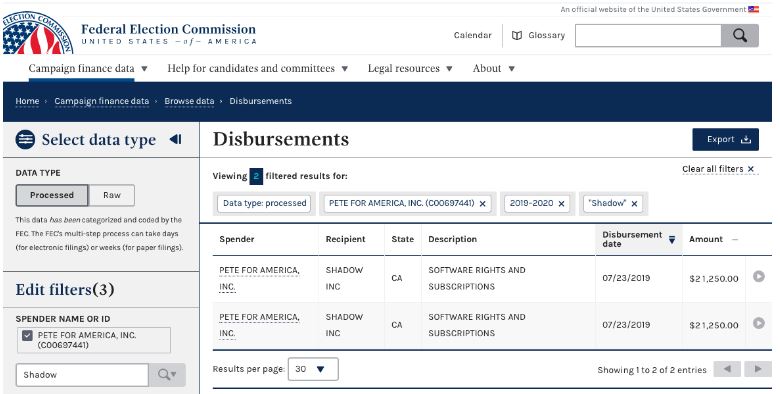 Of course, I’m not saying the Democrats cheated Bernie Sanders out of his victory in Iowa. I’m just saying it looks that way.

And why the long lines in California, Texas, and Michigan?

The hours-long lines we saw on the news in California, Texas, Michigan and other states alone rouse suspicion. At best, election officials are incompetent. At worst, they made it hard to vote on purpose. Most of us can’t afford to skip class, miss work, or pay a babysitter for two-to-six hours in order to vote.

Who knows how many people tried to vote for Bernie Sanders on Super Tuesday and Super Tuesday II… And found out they couldn’t. How else can we explain the difference between Sanders’ numbers in the polls vs. on the ballot?

Here’s the thing. I can see close races between Bernie Sanders and Joe Biden, with Biden edging Sanders out. Although Biden lacks the enthusiasm of Sanders’ supporters, he feels safer for many of us. Plus there’s been that steady drumbeat from the media — 90 percent of which is owned by just six corporations — that Biden’s “more electable.”

But this series of landslides makes zero sense. Just three months ago, Biden’s campaign was on life support. Then all of a sudden, all the candidates dropped out and all the big names gave the nod to Joe Biden. Kamala Harris looks like she’s been taken hostage in this stark endorsement video. But, by golly, she did it.

Nice political career you got there. Wouldn’t want anything to happen to it.

The fix was in

Ever since the beginning, it felt like the fix was in for Joe Biden. Or at least someone as conservative as Joe Biden. In 2016 it was “Hillary’s turn.” On Super Tuesday, the DNC apparently decided it’s Biden’s.

All those diverse candidates with fresh ideas on the debate stage? They were just window dressing. The more candidates we have, the higher chance we have of a plurality with no clear winner. And if no candidate wins more than 50% of the pledged delegates, the DNC rules let them bring in their superdelegates. And these much-despised party insiders are unbound by primary and caucus results. They’ll vote for whoever the DNC picks because they are the DNC.

First Senator Kamala Harris (D-Calif.) threw her hat in the ring, She raked in a stunning $1.5 million within her first 24 hours, mostly in small donations. Her record as a prosecutor is troublesome, but she’s still a highly-qualified, telegenic woman of color from our most highly populated state. She was also a staunch supporter of Bernie Sanders’ Medicare for All plan… Until she suddenly wasn’t.

It felt as though the Invisible Hand of the Free Market yanked Harris backstage and waved the dreaded admonitory finger. Likewise, Pete Buttigieg and Elizabeth Warren surged, then fizzled after dialing back on Medicare for All. To be fair, Elizabeth Warren merely put it on the back burner with an interim “public option.” But the millions of us with overpriced, inadequate health plans, or no health insurance at all, can’t afford to wait.

I’ll answer my own question. The Democratic leadership wants a neoliberal at all costs, even if it means losing votes and losing to Trump. And thanks to our Obama nostalgia, Biden was the only “centrist” (conservative) who got any traction. So, as if by magic, Amy Klobuchar and Pete Buttigieg dropped out to endorse Biden while Warren dropped out and tacitly endorsed Biden by not endorsing Sanders. Joe Biden has a horrible voting record and is not a real Democrat. He’s touchy-feely and totally gross with women. He’s spent 40 years trying to cut Social Security. He’s even said he’s willing to consider having a Republican as his vice president. His so-called “health” plan will still leave millions of with no access. His climate plan got a D- from Greenpeace. Plus he isn’t all there. Biden is NOT “electable.” The Democratic party’s base may want him, but they’re only part of the party. Plus — like the GOP — the Democratic Party only has 30 percent of the electorate. Nearly 40 percent of voters are Independents, more than the Democrats or the Republicans.

I’m also questioning the following narratives that are supposed to account for Joe Biden’s sudden string of questionably outsized victories.

Even if it just looks like the Democrats cheated, we’re screwed

Remember that old story about Julius Caesar from our high school history class? He divorced his wife Pompeia even though a trial found the man accused of being her lover not guilty. Why? Because, as the future ruler airily explained, “Caesar’s wife must be above suspicion.” While GOP voters seem to think the end justifies the means, the rest of us clearly hold our leaders to a higher moral standard. That’s why Katie Hill, Al Franken, and Anthony Weiner felt impelled to resign at the first whiff of a scandal… And they did.

Even if it just looks like the Democrats cheated, Team Trump will pummel us with it. And too many of us will stay home. Why? Because we’re the kinds of people who think things like, “Why can’t we just have a fair primary?” or, “Why can’t he just stop touching women and not have a son who got paid beaucoup bucks by a sketchy foreign fossil fuel company for ‘consulting’?” or, “Why the hell would the head of our State Department keep a goddamn server in her basement?”