Rep. Ilhan Omar’s stirred up a hornet’s nest. But, sorry Donald. Blasting AIPAC doesn’t make you anti-Semitic. And “Jexodus” is not a thing. Donald Trump can wish Jewish Democrats were fleeing into the GOP’s arms over her comments all he wants. But there is no such Exodus to the Republican Party.

In fact, Trump just wants to distract us from the real issue: That a major force behind the GOP’s Israel policy is anti-Semitic right-wing evangelical “Christians,” not AIPAC. We’ll get to that later. And never forget. A president who calls neo-Nazis “very fine people” is no friend to Israel or the Jewish people. Crying crocodile tears over the latest white terrorist attack on Muslims doesn’t make you not-racist. 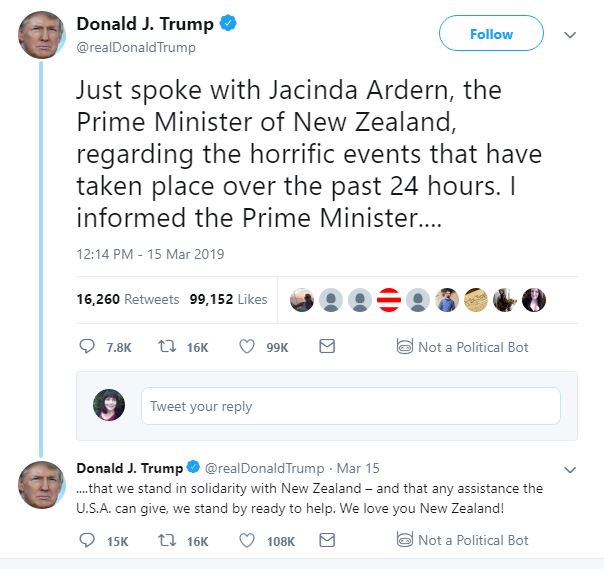 So, what do you do when a racist terrorist cites your president as a source of inspiration in their manifesto? Be afraid. Very afraid.

The GOP Doesn’t Care About Anti-Semitism: They Just Want to Weaponize It

In case you’re wondering why Republicans suddenly care about hate speech, look no further than the Motion to Recommit. MTRs have been used by the minority party to derail — or at least water down — legislation since 1909. How does it work? Indivisible’s website explains the minority party can offer an MTR “to stop or amend a bill” before the vote. The GOP uses this to sow divisions among Democrats, then sits back and watches the fun.

Their strategy? Pick an issue they think will divide Democrats, throw it into a last-minute MTR, and peel off just enough Dems to successfully water down an otherwise progressive bill with something problematic.

This is how Republicans got a racist, anti-immigrant amendment added to a gun background checks bill. So why not try sneaking a pro-Israel, anti-free speech clause into a budget bill? For a long time, Israel has been seen as a crucial U.S. ally and has enjoyed bipartisan support. The Democratic Party has especially had warm relations with Israel in the past. But as their abuses in Palestine have come to light, there’s an ever-widening divide.

Let’s also not forget. Then-House Speaker John Boehner (R-Ohio) invited Israel’s Prime Minister Benjamin Netanyahu to speak to Congress in 2015. This was clearly meant to send a pointed message of disrespect to President Barack Obama. And it surely contributed to Ilhan Omar’s concerns about Israel’s outsized influence on U.S. policy.

It all started back in December 2018. The GOP was pushing a spending bill to avoid a government shutdown. But guess what? The bill had a sneaky clause for companies and groups that support the Boycott, Divestment, and Sanctions (BDS) movement. This anti-BDS clause bans organizations from doing business with the U.S. government if they’re boycotting products from Israel. Florida, Texas, and 24 other states have similar laws on the books for state contracts.

Why is anti-BDS legislation so popular? Because the American Israel Public Affairs Committee (AIPAC) wants it. In fact, they practically wrote these laws themselves.

This in spite of the fact that this violates our First Amendment rights to free speech… And despite the fact that Republicans see corporations as “people” who therefore also have their rights to Freedom of Speech.

Meanwhile, our first Muslim congresswomen-elects Ilhan Omar (D-Minn.) and Rashida Tlaib (D-Mich.) were pushing back on our pro-Israel stance. Tlaib, whose parents came from Palestine, very publicly refused AIPAC’s invitation to speak in Israel. And both women came out against anti-BDS laws and in support of the BDS movement. 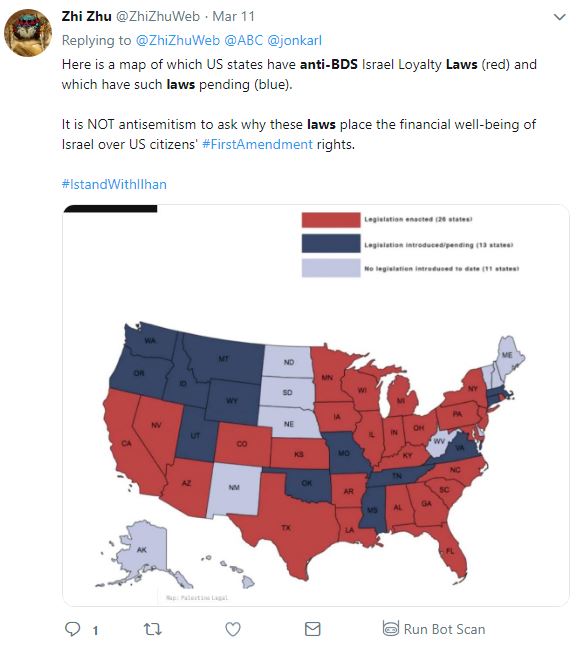 “It’s All About the Benjamins Baby 🎶”

Fast-forward to February, when the GOP began to weaponize Israel to divide Democrats on Donald Trump’s shutdown. First, House Minority Leader Kevin McCarthy (R-Calif.) threatened to “take action” against Omar and Tlaib. “If they do not take action, I think you’ll see action from myself,” he told reporters.

The Intercept‘s Glenn Greenwald then clapped back on Twitter with a pointed link to an article in Israel’s Haaretz. 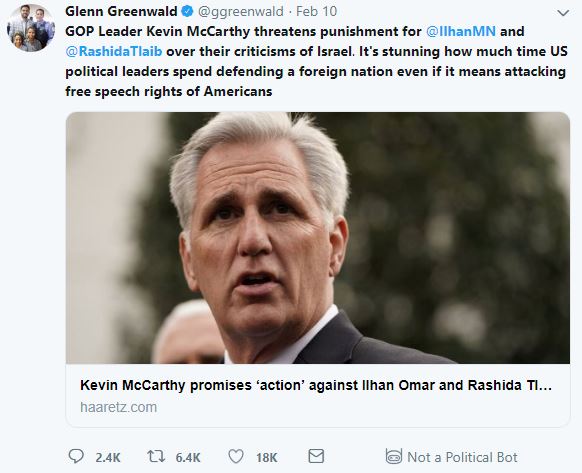 With a pop-culture reference that went right over most members of Congress’ heads — even with the musical notes — Ilhan Omar replied, “It’s all about the Benjamins, baby 🎶” 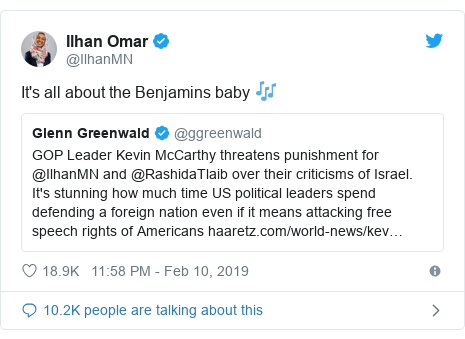 Ilhan Omar tweet: “It’s all about the Benjamins, baby 🎶”

And no, Omar’s not talking about some Jewish guy named Benjamin. The term, “Benjamins,” refers to Ben Franklin’s portrait on $100 bills. Nor is she conjuring up some tired old trope about evil Jews spending money to gain influence. She was specifically talking about the pro-Israel lobby. Among which AIPAC is the most well-known. 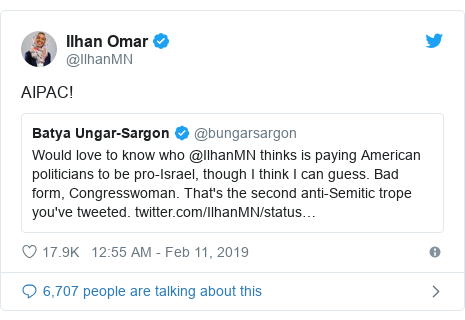 When asked what she meant, Ilhan Omar tweets back, “AIPAC!”

And now, she’s under fire from both Democrats and Republicans howling about her alleged “anti-Semitism.” House Speaker Nancy Pelosi (D-Calif.) has deftly managed to condemn anti-Semitism without condemning Ilhan Omar. Also, as the controversy came to a boil, the House passed a resolution that condemns all forms of hate.  Plus, she’s apologized. Yet, the GOP’s still got Democrats screaming at each other instead of at GOP lawmakers and Donald Trump.

I’ve got news for you. Big money in politics is not a “Jewish” thing. And objecting to its outsized influence does not make you a hater.

Meanwhile, the GOP gets a convenient excuse to hate on a Muslim congresswoman with impunity… While keeping brown children in cages, egging on terrorist attacks by white supremacists, and making a full-on assault against the hard-won rights of women, people of color, LGBTQ people, the disabled and others in disadvantaged groups. If the GOP really cared about hate speech, maybe they’ll rescind that Muslim ban.

Conflating Israel and Jewish People Is, In Itself, Anti-Semitic

But the assumption that all Jewish people blindly support Israel is, in itself, anti-Semitic. We’ve long claimed Catholics, Jews, and Muslim can never be full Americans because they’re more loyal to a foreign power. Within many of our living memories, people claimed John F. Kennedy couldn’t serve our country because he was Catholic. But the Vatican, Jerusalem, and Mecca are centers of our religions, not our civic identities.

For most Jewish people, Israel represents freedom from Pharoah’s bondage and refuge from the Holocaust. But loving Israel doesn’t mean loving apartheid in Gaza and the West Bank. So how do Jewish people feel about Israel? As shown in the tweet below, It’s complicated. 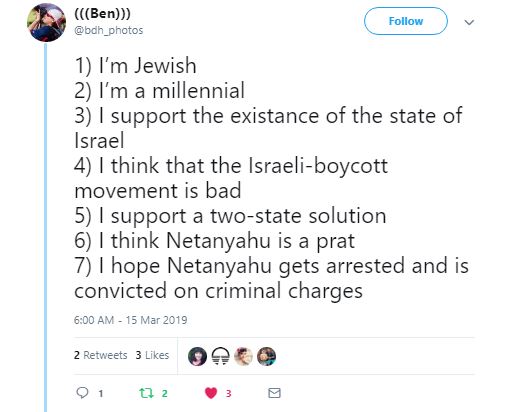 Tweet from a Jewish Millennial who supports the state of Israel and is against the BDS movement, but who believes Netanyahu should be arrested and charged.

Some fully support Benjamin Netanyahu’s government, while others love Israel but not Israel’s policies. Meanwhile, many liberal Jewish groups — along with an anti-Zionist Orthodox sect — stand with Ilhan Omar.

Anti-AIPAC and anti-Netanyahu tweet from Jewish Voice for Peace.

As pro-AIPAC journalist Jane Eisner writes in the Forward, “Trump Has Handed the Israel Lobby to Evangelicals. That’s Terrifying.” She goes on to explain that with V.P. Mike Pence in the West Wing, Christians United for Israel (CUFI)’s influence now dwarfs AIPAC’s.

Some may welcome the way that the Trump administration has tilted the scales toward Israel and its current hard-line government. But there is real reason to worry when foreign policy is in the grip of fundamentalist ideology, when political issues become biblical ones.

So why do these right-wing Christians love the Jewish people so much? They don’t. But Israel and its Jewish citizens have a role to play in the long-awaited Second Coming of Jesus Christ.

Since [Richard] Land and others like him believe that Jesus Christ will only return as the Messiah when Jews reside in Canaan and rule over Jerusalem, the establishment of the State of Israel in 1948 is considered a fulfillment of one aspect of biblical prophecy. Trump’s announcement on Jerusalem is another one.

“The Jews being back in the land and being in control of the land is part of the fulfillment of biblical prophecy. If we were, as a country, to thwart the Jewish people and their desires and their God-given right to occupy that land, then God would not bless us as a people.”

Jane Eisner adds Christians and Jews play a “starring role” in the drama Christian fundamentalists believe will unfold. But there’s no place for Muslims in all of this, they’re just in the way. There’s also good reason for many of Israel’s Jewish supporters to feel uneasy about this unholy alliance. As Vox points out, the end-times end with Jewish people and other non-believers being cast into burning lakes of fire. As Elizabeth Oldmixon, a Poli Sci professor at the University of North Texas, explains to Vox‘s Sean Illing:

“These are the folks who believe that there will be a millennium in the future, a golden age, where Christ reigns on Earth, [and] they believe that before Christ will return, there will be a tribulation where Christ defeats evil. There will be natural disasters and wars, and perhaps an Antichrist, as the book of Revelations notes. Then at the end of that period, the people of the Mosaic covenant, including the Jews, will convert. Then after their conversion, the great millennium starts.”

Yes, you read that right. “After their [the Jews’] conversions, the Great Millennium starts.” So what becomes of those who don’t convert, Illing asks. Oldmixon’s answer:

Well, according to the evangelicals who believe this, they’ll end up with the rest of the unsaved, which means they’ll be wiped out and sent to hell.

Wow. You can’t get much more anti-Semitic than that.

The Song That Sparked A Million Tweets

In case you’ve never heard it… Here’s the Artist-Formerly-Known-As-Puff-Daddy’s 1990’s hit, “It’s All About the Benjamins.”