Sorry, Democrats: Scapegoating the Left Is NOT the Path to Victory 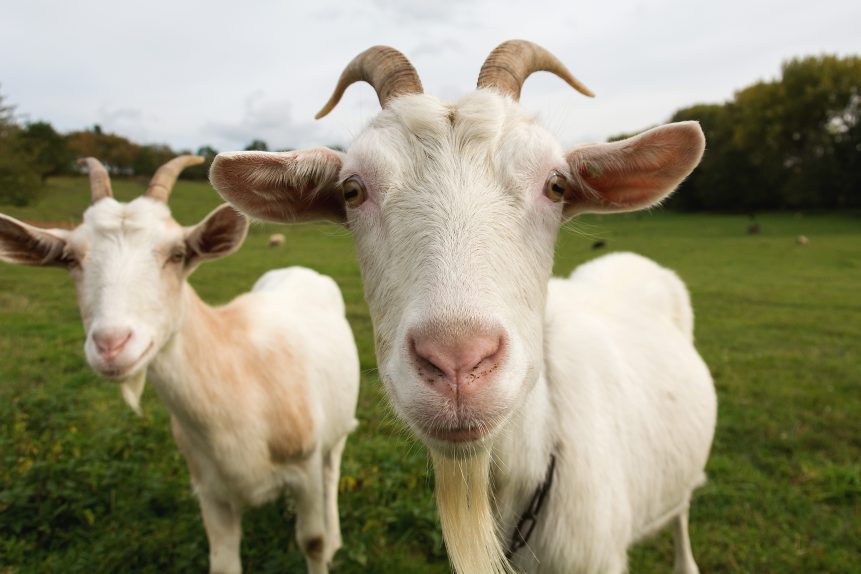 As the old saying goes, you can lead a scapegoat to the Koolaid, but you can’t make them drink. So take that, you lying, dog-faced pony soldier.

And now, we’ve got Joe Biden, who offers nothing but a thin, pasty gruel of stale platitudes, harm reduction, and not being Donald Trump.

It’s like the old folks telling youngsters, “Time’s up, you’ve had your fun, now get off my lawn.” Never mind voters in the 21 states that haven’t held their primaries yet. You want Bernie Sanders, Medicare for All, and a Green New Deal? You dare to expect our government to protect you and the planet we live on from corporate abuse? Shut up and eat your broccoli. You’ll get the back of my hand and you’ll like it.

You are not entitled to our votes

Just because we support Sanders, some Democrats think we owe our vote to whoever is the nominee. But what if the nominee helped create the injustices we’re fighting against? The naysayers insist none of Sanders’ programs would pass the Senate But that’s not the point. As NHL coach Wayne Gretsky once said, “You miss 100 percent of the shots you don’t take.”

I wish I could tell my #BernieOrBust friends something that would get them to at least consider voting for Biden. But I’ve got nothing.

Even before Bernie Sanders gave his exit speech, the Biden brigade was out in full force… With five months to go, they’re demanding that we fall in line and get behind Joe Biden. Why should we, when he doesn’t care if we have a planet to live on or access to healthcare? Why should we when they’re already blaming us for Biden’s likely loss to Donald Trump? Maybe they should blame the way they rejected us and chased after those elusive “moderate Republicans” and “suburban swing voters” instead. 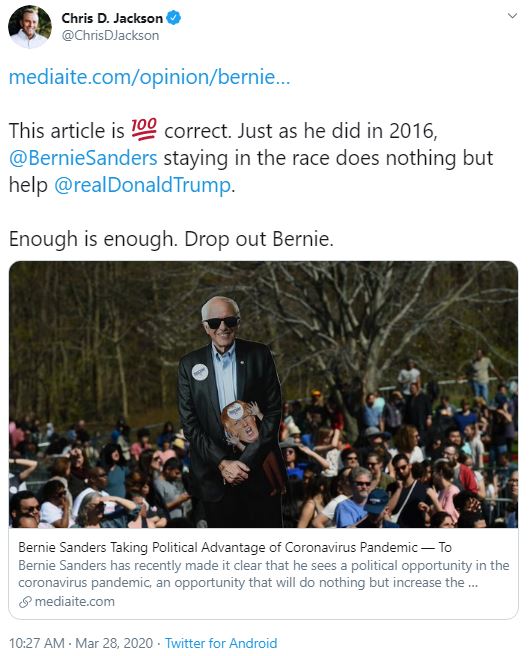 As Ryan Knight (@ProudResister) pointed out (where I got this post’s title from), “That’s not how democracy works. The candidate that wants to win has to reach out & build the coalition. Scapegoating progressives is NOT the path to victory.” 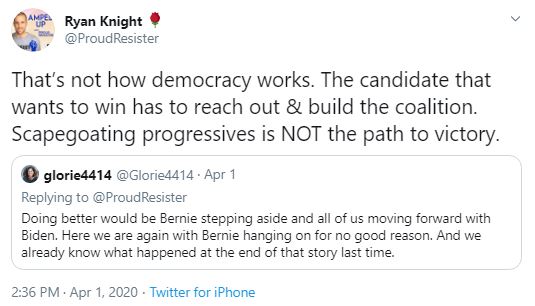 Whatever happened to actually earning people’s votes by talking about the things we care about? Or, better yet, fighting for things like Medicare for All that will improve our lives or at least make us not die? And why can’t Biden just get on board with ditching useless, expensive health insurance companies? With 55 percent of all voters in favor and coronavirus pushing healthcare to the forefront, it seems like a no-brainer.

Oh wait, maybe Biden’s wealthy donors have something to do with it. After all, he promised them that, if elected, “nothing would fundamentally change.” He then added, “I need you very badly.” 🤮 Yikes. And when Biden’s campaign mysteriously surged on Super Tuesday, health insurance stocks jumped by a whopping $48 billion. 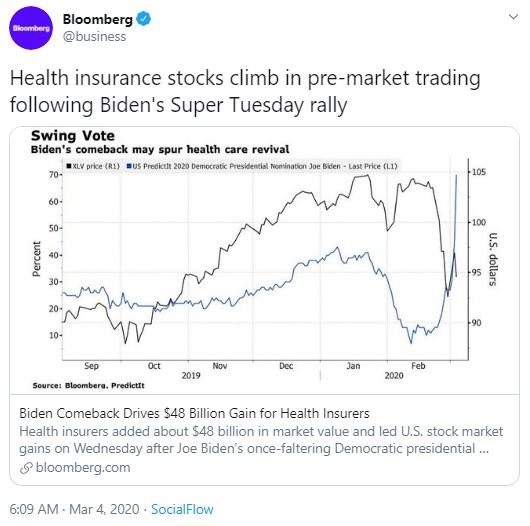 I find this “Joementum” highly questionable given the lack of crowds, donations, and enthusiasm. I’m not saying the Democratic leadership cheated, but a lot of backroom dealing must’ve been going on. Plus, the hours-long lines at the polling stations in California and Texas didn’t help. And as I’ve said before, I wish the Democrats had fought the GOP as hard and effectively for the past 40 years as they’ve fought Bernie Sanders in the past five.

When they come a’ courtin’…

In a way, politics is like dating. Back when I was 13-going-on-jail-bait, my dad told me, “All guys are pigs.” And also, “A guy will never treat you better than he does on the first date.” What he meant was… If they’re not trying to impress you in the “courting” phase, cut bait because it’s all downhill from there.

So what am I supposed to think of a candidate for president of the U.S. who — in response to a reasonable question at a town hall in New Hampshire — calls a young voter a “lying, dog-faced pony soldier“? Seriously. This is not a guy who values your vote.

And what kind of candidate angrily tells people to “vote for someone else”?

Or tells them they’re “full of sh*t”? I don’t agree with this worker’s stance on gun control. But you can tell someone the Second Amendment doesn’t guarantee your right to stockpile weapons without insulting them.

Seriously. This is next-level Hillary-Clinton-vowing-to-“put-coal-miners-out-of-business” bad.

Houston, we have a problem…

I don’t get why people are in such a rush to get Biden across the finish line. He’s a deeply flawed and highly vulnerable candidate. I’m a lifelong Democrat and one of those people-pleasing extroverts who hates ticking off people. I wouldn’t be writing this if I didn’t believe that Biden would be terrible for our party and for our country. As long as there’s even the tiniest chance of Joe Biden not being the nominee, I will fight against him being the nominee. This basic tenet from probability theory sustains my barely-flickering yet ever-persent flame of hope: Even if the probability of Bernie Sanders winning the nomination is zero, events that have zero probability are still possible.

First, let’s take a look at Biden’s “senior moments.” Like when he declared that “all men are created equal by, you know, the thing.” This is not a “stutter.” Love or hate him, Biden has always been a strong speaker.

Joe Biden tries to quote the Declaration of Independence, failspic.twitter.com/ULzGB0XtQK

And, dear Lord, what is going on here?

Despite what Joe's camp is claiming about technical and lighting issues of streaming from Joe's house, this video of a seemingly confused Joe being escorted off by Jill was in fact done from his house. pic.twitter.com/UJzXbePhG3

Then there’s that creepy rapey uncle thing he’s got going on. Take my advice, ladies. When someone gives you that icky feeling, run. Always obey the ick. 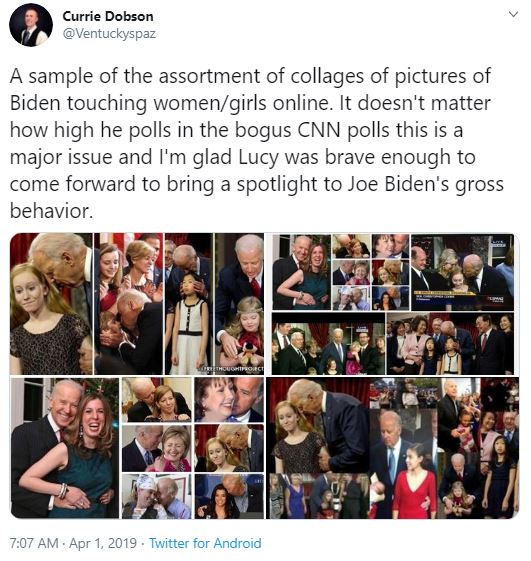 And how about Hunter Biden’s $50K a month gig at Burisma, a sketchy oil company in Ukraine. Could the higher-ups have wanted access to his dad, who was then Vice President? The GOP’s already all over that like a cheap suit. Of course, this wasn’t technically illegal. But lots of people deep-down feel it should be and will stay away from the polls. 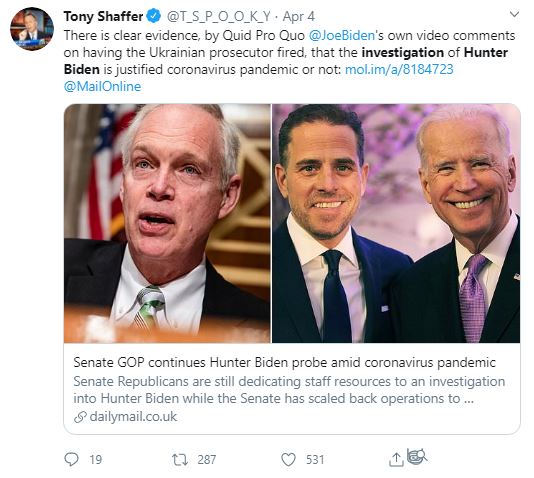 Because, 💥NEWSFLASH!💥 Republicans will ignore their guy’s baggage if he can advance their cruel and toxic agenda. Democrats and Independents, on the other hand, are not nearly as forgiving.

Seriously. Once again, the primaries are just what Pete Buttigieg calls a “shiny object” to distract us. The DNC was never going to allow a real progressive to lead the ticket. They kept trotting out the candidates, but only Biden could reject Medicare for All and still get votes. Once they reluctantly picked Biden, the fix was in. On the eve of Super Tuesday, they sent out the signal, and everything fell into place as if by magic. The endorsements. The talking heads marveling at Joe Biden’s magical resurgence. The remaining hopefuls dropping out and urging us to vote for the most regressive one in the race.

Now, some top Democrats have buyer’s remorse, but they still demand that we fall in line. 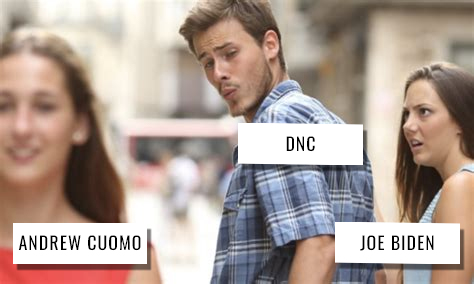 How dare we act like the Democratic primary’s an actual primary where candidates compete to win our votes? How dare we expect the Democratic leadership to run a fair race instead of incessantly trying to “stop Bernie Sanders.” How dare we want the 30+ percent of us who back Bernie Sanders to be represented in our party’s platform. How dare we demand a fair shot for the guy who will fight fiercely for our health, our homes, and our livelihoods when the next recession or pandemic hits… Instead of bailing out banks and giant corporations?

Of course, when push comes to shove, most of us will vote for the guy who’s not Trump. But will it be enough to put him over the top? That all depends on Joe Biden. Why should we on the Left give up all of our leverage for nothing in return? Bernie Sanders is still on the state ballots. If he wins at least 25 percent of the delegates — which is well within reach — we get a say in the Democratic Party’s platform and on the rules for 2024.

Then maybe, just maybe, we can get Joe Biden to do something that will make us want to vote for him. 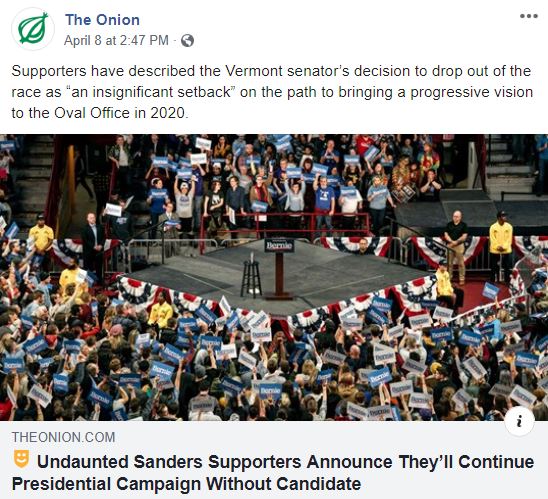