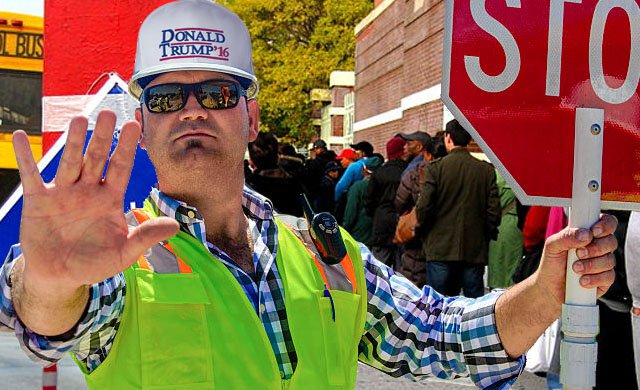 When the going gets tough, the GOP keeps black people from voting.

Donald Trump keeps claiming U.S. elections are rigged — and it’s true. But the GOP’s doing the rigging to keep black from voting, along with other groups likely to vote for Democrats.

The Indiana Voter Registration Project (IVRP) is now “under investigation” by GOP-appointed officials. This could potentially block 45,000 voters — nearly all of whom are black — from casting their ballots.

But fraudulent voting’s not the issue, here:  The state of Indiana needs get-out-the-vote efforts way more than they need voter suppression. During the 2014 midterm election, Indiana’s turnout rate was only 28 percent — our nation’s lowest in a miserably low-turnout election. A scant 36.4 percent voted nationwide: That’s the worst turnout in 70 years.

Now, record numbers of people in the state of Indiana are voting early and have had no issues whatsoever. But that may change. Indiana State Police Superintendent Doug Carter told WTHR 13 that a massive “voter fraud investigation” is underway. Why? Because some errors were found with the voter registration forms the IVRP had gathered. He warned:

‘I think there will be people that will get to the voting booth and won’t be able to vote.’

Doug Carter — who was appointed by none other than Donald Trump’s running mate Gov. Mike Pence — claims voters’ names, addresses, and other information may have been changed or faked. He then adds that the severity of the issue is “pure speculation at this point. But enough to believe we have to keep going.”

Because of course a GOP-appointed official feels he has to “keep going” with a bogus investigation that is “pure speculation. Their platform’s so cruel and destructive they wouldn’t be able to win if they didn’t keep people from voting.

So, who’s in charge of investigating claims of voter fraud? Connie Lawson, Indiana’s secretary of state. And guess who appointed her? Mitch Daniels, another GOP governor.  The Indianapolis Recorder reports the statement from her office insists that the voter registration group turned in voter registration forms with missing, illegally edited, or false information.

‘A group by the name of the Indiana Voter Registration Project has turned in forged voter registration applications. The group was altering already registered voter’s (sic) information. The group would change the voters (sic) address to an address not associated with the voter without the voter’s knowledge.’

But the Patriot Majority slams Doug Carter’s and Connie Lawson’s allegations as “defamatory” and “partisan.” In addition, they’ve filed a complaint with the U.S. Office of Special Counsel claiming that Indiana Police First Sgt. William Stoney Vann has tried to “deliberately” obstruct the group’s voter registration drive through intimidation. In addition, they accuse the Indiana State Police of denying IVRP’s staff right to contact their attorney.

‘Patriot Majority President Craig Varoga accused Stoney Vann of “literally using his badge and gun to go door-to-door, going to the homes of primarily African-Americans and trying to intimidate them from engaging in the political process.’

Meanwhile, Dr. Benjamin Chavis, president and CEO of the National Newspaper Publishers Association (NNPA) has no doubt about what’s going on. He told Roland Martin from News One Now:

‘Now, this is voter suppression. This is not voter fraud. The Republicans — and we’ve got to call Mike Pence’s name. He wants to be vice president of the United States, but it was his state police, the Indiana state police, put a raid on the largest voter registration apparatus in the state of Indiana.’

‘They shut it down. And they confiscated the records. So all the people that the voter registration group registered are now in jeopardy. When 10,000 more blacks go to vote in Indiana, they’re going to be questioned about this police raid result. So this is voter suppression.’

ecause really, when Republicans talk about voter fraud, “they need to look in the mirror.” The only thing Chavis can find wrong with voting in this year’s election is “Republican black voter suppression.”

Featured image/composite:  Bryan Hainer via Getty Images (foreground) and cc 2008 April Sikorski via Wikimedia Commons (background). A version of this article appeared in the Bipartisan Report.