Where The Heck Did ISIS Get All Those Tanks, Weapons And Shiny New Toyota Trucks? 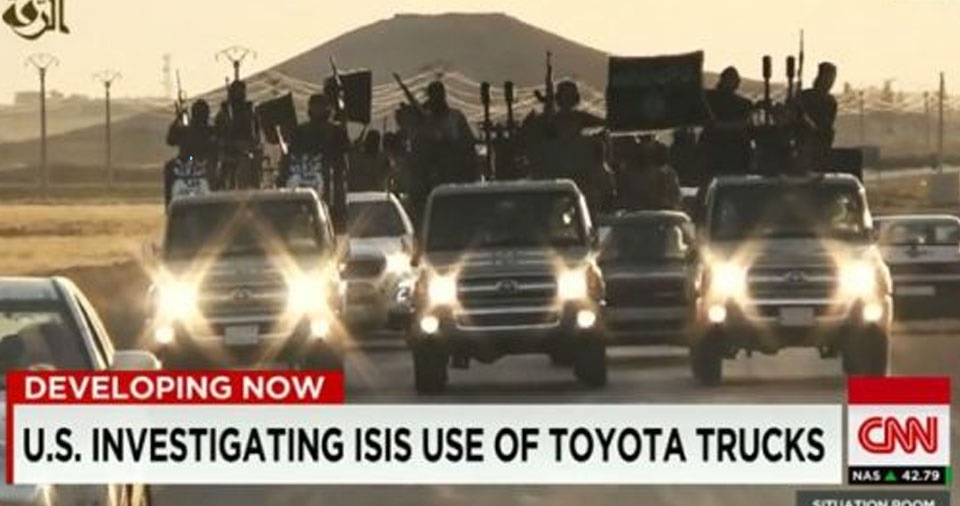 ISIS Also Has Tons Of U.S. Weapons, Vehicles And Other Military Gear.

Toyota trucks aren’t all ISIS has managed to buy, capture or scavenge from us. In June, CNBC reported that so far we’ve accidentally furnished the Islamic State with at least $219.7 million worth of weapons, vehicles and other military supplies and gear — and that’s just the stuff we know about.

Based on various reports, CNBC came up with the following laundry list of supplies the U.S. has so kindly provided to ISIS so far.

TOTAL: $219.7 MILLION in military weapons, vehicles, and other supplies and gear for ISIS.

How does the Islamic State get hold of all these U.S. weapons? We deliver them, either directly or through the tattered remnants of Iraq’s military. Jeremy Salt, a political analyst in Ankara, Turkey, gives RT.Com quite the scathing earful:

“Do you think the Islamic State’s advance would have been so successful without access to this U.S. military hardware by mistake, by default? Let me just briefly revise the history of American blunder over the past couple of years with regard to weapons ending up in the hands of Islamic State.”

Salt then reminded us of our nation’s major blunders for supplying weapons to ISIS for the past couple of years.

Salt doesn’t even bother explaining how the George W. Bush administration created ISIS by invading Iraq on false pretenses and chasing off all those heavily armed and well-trained Baathist soldiers. But he does ask how it’s even possible that U.S. intelligence and the military — both of which are among the most sophisticated in the world — could have possibly NOT seen what was coming.

What Salt says here about ISIS’s routing of Palmyra also applies to the sack of Mosul and Ramadi.

“Are we seriously to believe the United States couldn’t see them coming? Didn’t see those pickup trucks racing across the Syrian Desert? When they create massive plumes of dust, for one thing? Then they get to Palmyra, and they take over the city.”

Salt has a point. How could we have possibly missed miles of vehicles chock-full of masked ISIS militants waving guns and black flags while churning up choking clouds of desert dust visible from miles around? It’s almost as though we’ve ignored all this on purpose.

As for President Barack Obama, he’s made some smart moves. But how can he slam the brakes on a runaway crazy train that’s been lurching headlong for decades? After all, Reagan’s the one who armed and trained Al Qaeda back when they fought the former USSR as the Mujahideen resistance fighters. Also, we helped Saddam Hussein take power in Iraq in 1963, and Hussein was on the CIA’s payroll since at least 1959. And then we overthrew him and allowed the region to devolve into chaos because George W. Bush isn’t into “nation building.”

Here’s the video with the news report from RT on ISIS’s acquisition of U.S. military supplies, weapons, gear and vehicles. [NOTE: Although RT is a tool of the Kremlin, they still do a lot of good reporting.)

Featured image: Video screen grab via CNN. A version of this first ran on Reverb Press.