Where The Heck Did ISIS Get All Those Tanks, Weapons And Shiny New Toyota Trucks?

We’ve seen the propaganda videos with ISIS parading through conquered territory in their shiny, new Toyota trucks. But how are they getting them?

Yikes! Those evil, marauding terrorists from ISIS are still at large, but fear not: ISIS can’t escape from the U.S. and our allies for long. And when we get ’em, we’re going to kick their cartoonist/ woman/ gay/ Christian-hating Jihadi butts from here until Sunday.

There’s just one problem. If we’re at war with ISIS, why do we keep supplying them with U.S.-made tanks, weapons, Humvees and shiny new Toyota trucks?  CNN reports:

According to ABC, the U.S. Treasury Dept.’s Terror Financing unit has finally taken notice of the endless parades of shiny, new Toyota trucks starring in ISIS’s propaganda videos, and they’ve launched an investigation. Toyota’s U.S. spokesman Ed Lewis told reporters this is part of a larger inquiry into supply chains and capital flows in the Middle East. Lewis promised Toyota’s full cooperation, and assures us that they’d never sell to terrorists.

“Toyota has a strict policy to not sell vehicles to potential purchasers who may use or modify them for paramilitary or terrorist activities, and we have procedures and contractual commitments in place to help prevent our products from being diverted for unauthorized military use.”

Whew. What a relief.

Every one loves Toyota trucks, so why not ISIS?

CNN tracked down Jonathan Schanzer — who used to track terrorist finances for the U.S. Treasury Dept. and who’s now with the Foundation for Defense of Democracies — to find out more. Schanzer explained that rugged outdoorsmen and off-roaders aren’t the only ones who love their Toyota trucks:

“Toyotas is the truck that Jihadists choose for when they want to go to war. It’s the same thing with Kalashnikovs [Russian automatic rifles more commonly known in the U.S. as AK-47s].”

That’s hardly any surprise. Toyota trucks are comfortable, look bad ass, get decent mileage, handle well on rough terrain, and receive great reviews. So, how do these ISIS terrorists get their hands on these bad boys? Schanzer suspects they just boldly walk into the car dealerships and pay cash!

“I think they’re buying them, probably, through formal channels. They’re probably going right into the dealerships and purchasing them, and not identifying as ISIS. Who would?”

Oh, and although Toyotas are the Jihadist’s truck of choice, they won’t object to a Ford or two. We’d love to see the look on this U.S. plumber’s face after seeing what Schanzer suspects ISIS picked up at an auction. As if to thumb their noses at us, they didn’t even bother to remove the former owner’s information from the front passenger side’s door. 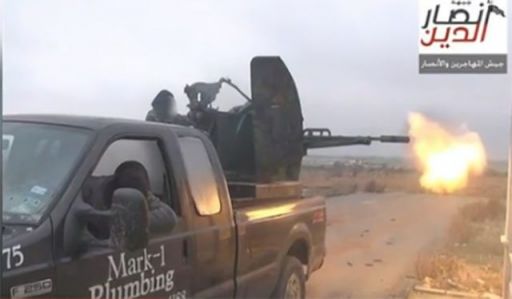 CONTINUES ON NEXT PAGE.
Pages: 1 2