Donald Trump Is Right: The 2016 Election Was Rigged (DETAILS) 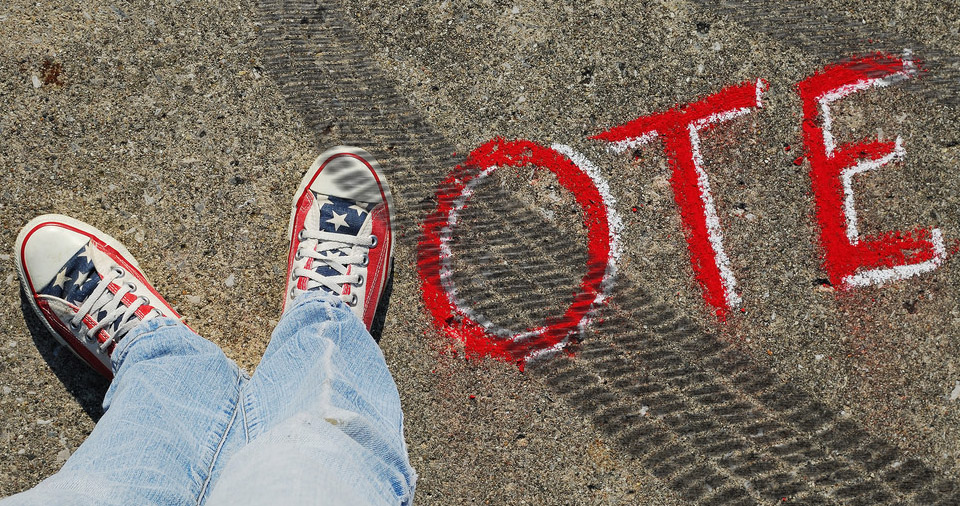 With Hillary Clinton’s huge early voting numbers and surge in the polls, how did Donald Trump win? He didn’t, but in a rigged election, that doesn’t matter.

Donald Trump warned about a rigged election all through 2016. But he was wrong about who was doing the rigging. Remember: These right-wingers often reveal the evil things they do by assuming the rest of us do them too.

All this talk about exit polls, voter suppression, Russian hackers, and gerrymandering sounds like the stuff of deranged conspiracy theories. Yet these three experts — investigative journalist Greg Palast, U.C. Berkeley law professor Jonathan Simon, and NSA Director Admiral Michael Rogers — agree this was a rigged election. Furthermore, Rachel Maddow warned us about this back in 2013.

Last Friday, Greg Palast declared “the election was stolen” on his blog. GOP-run states used a system called Crosscheck to purge 1.1 million mostly minority voters from the rolls…And then Donald Trump managed to win in swing states that seemed likely to go to Hillary Clinton.

In his August report for Rolling Stone, Palast explained the role Crosscheck played in this rigged election. The system was supposed to keep voter information up-to-date. Instead, GOP officials abused it to flag people they claim may have registered to vote twice.

The result? People wound up on a long purge list just for having the same or similar names.

Greg Palast got hold of just part of the Crosscheck list (which still had that 1.1 million names on it). He then brought in a database analyst who found the list “disproportionately threatens” Democratic minority voters in swing states.

And here’s the perfect cherry to top off this fustercluck sundae: The man who created Crosscheck is Kansas Secretary of State Kris Kobach, one of Mein Trumpf’s advisers!

Do YOU live in one of the 29 CROSSCHECK states?
If so, YOUR VOTE may be at risk!https://t.co/fgCVbsyU2L pic.twitter.com/ES2sjJzlRZ

The exit poll numbers don’t add up either.

Soon after the alleged victory of Donald Trump, Theodore de Macedo Soares posted a stunning chart on his electoral integrity blog, TDMS|Research. After downloading, crunching, and comparing CNN’s exit poll data with the final vote counts, he found the numbers make no sense.

Exit polls are usually highly reliable…And the ones from North Carolina, Pennsylvania, Wisconsin, and Florida clearly show Hillary Clinton should have won.

Macedo Soares may have more smarts than formal credentials. But someone else agrees the numbers don’t add up…And he just happens to be a published author and the Associate Dean of the Jurisprudence and Social Policy Program at the Boalt Hall School of Law at U.C. Berkeley.

Jonathan Simon talked with Steve Rosenfeld from  Alternet and gave him quite an earful.

Simon’s been tracking exit polls for the past 15 years and said he’s seen a pronounced “red shift” since 2004. Year after year,  exit polls favor the more left (blue) candidate. Then the vote counts abruptly shift right and the more conservative candidate wins.

While Simon doesn’t go so far as to say this latest rigged election was stolen by the GOP, he believes something’s seriously wrong with these numbers. On the one hand, too many people care more about the Kardashians than they do about voting and politics. On the other hand, the system is so entrenched that no one who’s in a position to change things wants to rock the boat.

You will rarely meet a politician or a journalist with a seat at or anywhere near the adult table who wants to rock this boat, who wants to pull the cover off of this thing, who wants to restore public sovereignty.

Even if the votes haven’t been tampered with, our computerized voting systems, lack of transparency, and lack of paper ballots foster a level of distrust that likely effects voter turnout. When there’s no way to verify whether votes get counted properly — and one political party keeps undermining our faith in government — then people start believing what they want to believe.

Even this former NSA Chief agrees Russia meddled in the 2016 election.

Admiral Michael Rogers, the buttoned-down director of the NSA, isn’t exactly the type who’d talk about a rigged election. But here he is saying Russia’s meddling had an effect.

"A conscious effort by a nation-state to attempt to achieve a specific effect" NSA chief on WikiLeaks https://t.co/kvmrTyVE30 #WSJCEOCouncil pic.twitter.com/AT2pxK2ROR

On Tuesday, The Wall St. Journal asked Rogers about the Wikileaks hack and he answered:

Mother Jones adds that Rep. Elijah Cummings (D-Md.) and other House Democrats demand an investigation and Donald Trump’s “many, many, many ties to Russia” have been noted by Time and countless other news sources. But with Team Trump taking power, who’s going to do the investigating?

Republicans love to go on about how voter ID laws have no effect on whether or not people can vote. But if these laws didn’t prevent likely-Democrats from voting, why would they bother passing them? The ACLU reports 34 states require some form of ID at the poll, and seven states have very strict photo ID laws.

As it turns out, a whopping 21 million of us and our fellow Americans do not have the required government-issued photo ID’s required to vote in many states. Why is getting a photo ID such a huge obstacle? As Supreme Court Justice Ruth Bader Ginsberg wrote in her scorching six-page dissent on a 2014 ruling for a draconian voter ID law in Texas, it’s harder than you think. Because getting a photo ID requires many hidden fees and underlying expenses and hassles, Ginsberg declares it amounts to a poll tax.

Sure enough, the fees and related expenses for obtaining acceptable photo IDs are out of reach for many due to the expenses and hassles. How can you get a driver’s license if no one you know has a reliable car? If you have one, how do you renew it if you owe parking tickets or fix-it tickets for a broken tail light and can’t afford to pay? What if your mother gave birth to you at home instead of a hospital and you hence don’t have any birth certificate? Many forms of ID require a birth certificate. What if you’ve gotten married and your name no longer matches the name on your birth certificate? A Texas judge almost got barred from voting in 2013 because her drivers’ license had her maiden name as her middle name and hence didn’t match all her public records. All those obstacles cost money and are major hassles to fix.

So did voter ID laws contribute to Hillary Clinton losing the White House? No one knows for sure because there doesn’t seem to be much reliable data on people affected by voter ID laws. Yet it seems hard to believe these laws wouldn’t have an effect. In Wisconsin, voter turnout plummeted by 41,000 since the (pre-voter ID law) 2012 election….And Donald Trump won by just 22,748 votes.

The Electoral College is out of control…and the GOP likes it that way.

The first hint that something has gone horribly wrong was in 2000 when Al Gore won the popular vote by 500,000 but still lost the Electoral College to George W. Bush. It all came down to badly-designed ballots followed by a dodgy recount in Florida, a state run by Bush’s brother, Jeb Bush. Five Republican Supreme Court Justices — two of whom were appointed by Dubya’s father — then voted to halt the recount.

Then in 2016, Donald Trump “won” the White House despite the fact that Hillary Clinton won the popular vote by 2.8 million. The Electoral College has always been an unfair and undemocratic institution. But the Electoral College has only gone against the popular vote four times in our nation’s entire history, and the first two times were never as egregious as in the 2000 and 2016 elections.

As Rolling Stone points out, the Electoral College gives far more voting power to people in states that are more rural and lean right and a handful of swing states.

Also, except in Maine and Nebraska, even if a candidate wins by only one vote, they get all of their state’s electoral votes. Apparently, Our Founding Fathers never thought so many of us would cram ourselves into a handful of center-to-left-leaning cities because — despite the high rents and crowded spaces — we still find them more livable that conservative areas.

Next time you hear a Trump supporter rant about a rigged election system, ask them to explain why a person from Wyoming’s vote is worth 362 percent more than what each vote from California is worth.

RedMap: Rachel Maddow explains how the GOP seized control of our elections.

But here’s the thing…In January, 2013, Rachel Maddow reported on how the GOP bragged about its RedMAP project. This long-term plan — which has involved co-opting the Christian Taliban, stoking racial resentments through coded “dog-whistles,” and soft-pedaling a hard-right agenda — began to bear fruit in 2010.

By then, they’d seized control of enough state governments to redraw district maps that would make it harder and harder for Democrats to win at the state or national levels. The GOP’s platform has grown more extreme and less popular with time, yet they’ve won the House, the Senate, the White House, and soon, the Supreme Court.

And it all started decades ago as wealthy donors with a hard-right agenda — Like Charles and David Koch — began building a base from the ground up, even at the school board level.

RedMAP goes a long way towards explaining how the GOP has been able to pass laws that keep people from voting through voter ID laws; appoint elections officials who keep people’s votes from counting through tactics like purges and long lines at the polls;

Like any political party worth its salt, both Democrats and Republicans try to one-up each other when they get the chance. But in recent years, the GOP has taken it to a whole new — and terrifying — level.

Here’s a more recent video from 2015 with Rachel Maddow explaining how the GOP positioned itself to rig our elections.