Come on, People, the Bernie Bashing and Hillary Hating Needs to Stop 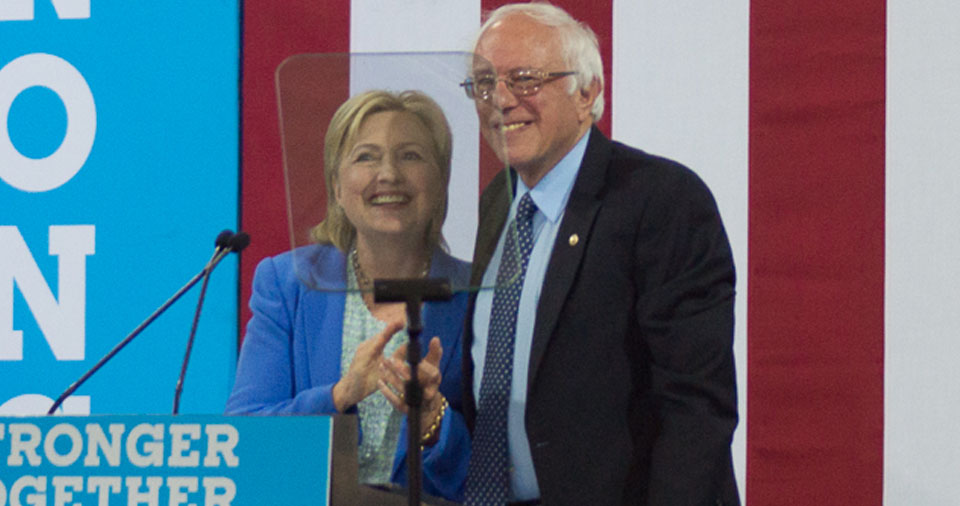 This week, some women are in an uproar because Bernie Sanders is one of the opening night speakers at the Women’s Convention at the end of October. It doesn’t help that there was a rumor going around that he’d been picked as the keynote speaker instead of a woman.

Meanwhile, Hillary Clinton’s out promoting her book, “What Happened,” and she’s basically damned if she does and damned if she doesn’t. When she speaks out, people want her to shut up. When she’s quiet, people demand to know why the hell she’s not saying anything.

No matter which side you’re on, I’ve got news for you. The 2016 election’s over and we need to focus on the ones coming up in 2018. Every time you bash people in the center and on the left, a Republican cackles and rubs their hands with glee while a Russian troll grows wings. Plus, that “Bernie Bro” or “Hillbot” that’s been trolling you is likely just that…A troll.

If we don’t win back the House and at least keep our seats in the Senate, we’re in serious trouble. You can see all the damage our “unified Republican government” has done in just nine months. Imagine how much damage they can do in four years…Or longer. For starters, if they keep the House, they get to redraw our congressional districts in 2020.

The Democrats have 25 Senate seats up for election if you count Bernie Sanders (I-Vermont) and Angus King (I-Maine), who caucus with the Democrats. Meanwhile, the GOP’s only defending eight. As for the House,  435 seats are up for grabs.

If you’re posting angry screeds against Bernie Sanders or Hillary Clinton then you’re part of the problem. As we’ve hopefully learned from the 2016 election, we need every damned vote we can get.

Telling baby boomer women who grew up being told women can’t pursue careers their heroine has feet of clay is not going to make friends or win anyone over to your cause. Telling Millennials who can’t afford health insurance and are struggling with crushing student debt that they’re stupid and unrealistic for wanting single-payer healthcare and tuition-free college — which every industrialized nation has except for the U.S. — will get you nothing but anger and resentment.

Democratic Party stalwarts need to remember we’ve always had a big tent. We need to welcome as many voters as possible. It’s okay for people to be farther left or right than we are on some issues. Hillary Clinton and the Democratic Party brought some key items from the Bernie camp into their platform, and we need to continue being flexible while focusing on our common causes rather than our differences.

For the most part, we all want the same things and mainly disagree on how to get there. For example, we all want health insurance for as many people as possible. Hillary Clinton’s supporters want a market-based solution while Bernie Sanders’ contingent favors single payer, but at least we all believe healthcare is a human right. Meanwhile, the GOP’s trying to take away our health insurance even if that means some of us will die.

With that all said, left-leaning Independents, need to look at the 2000 and 2016 election results and acknowledge the fact that every time they stay home or vote for a third-party candidate, we end up with a Republican in the White House. And make no mistake: No matter how much we hate the two-party system, throwing away our votes is feckless and carries dire consequences for our black, Latinx, and LGBT friends, not to mention anyone with a pre-existing condition.

Both the 2000 and the 2016 elections were likely stolen, but you can’t steal an election unless it’s close in the states that count. Hillary Clinton won the popular vote by 2.8 million, but the margins of Donald Trump’s ill-begotten wins in Pennsylvania, Wisconsin, and Michigan were vanishingly small and amounted to less than 2 percent in these states.

While it’s possible to grow a third party, it would have to be built from the ground up, starting with seats in local and state governments. That’s the only way to gain the kind of influence and networks that would make the top dogs in the Democratic Party want to play ball with you. Running for president — as the Green Party’s Jill Stein did — may get some visibility, but that doesn’t translate into power.

When Democrats are in power, at least we get a seat at the table. When Republicans win, we get nothing.

The role of voter suppression in Hillary Clinton’s stunning loss.

UPDATE: Speaking of voting rights, several readers pointed out that I should have said more about the effect of voter suppression on turnout for likely Democratic voters. And they’re right. We can’t bash people for not voting when so many of us can’t vote.

I discussed this at length back in 2014. Supreme Court Justice Ruth Bader Ginsburg issued a scathing dissent against a ruling in favor of a Texas voter ID law that’s among the strictest in the nation. At the time an estimated 600,000 people would lose their voting rights, and Bader Ginsburg — joined by Justices Sonia Sotomayor and Elena Kagan — said getting the required photo IDs amounted to a poll tax.

A week after the election, Think Progress wrote an article titled, “Republicans were wildly successful at suppressing voters in 2016.” That about sums it up. This was the first election we’ve had since the U.S. Supreme Court’s gutting of the Voting Rights Act fully took effect, and the results are exactly what we’d expect. The difference is especially dramatic in Wisconsin, North Carolina, and Florida. Add all the people who can no longer vote because they’ve done time for felony convictions — often because of a “War on Drugs” that discriminates against people of color — and you’ve got a lot of likely Democratic voters who are barred from voting.