Sorry, Right-Wing ‘Christians’: Jesus Christ Is A Liberal And These 20 Quotes Prove It 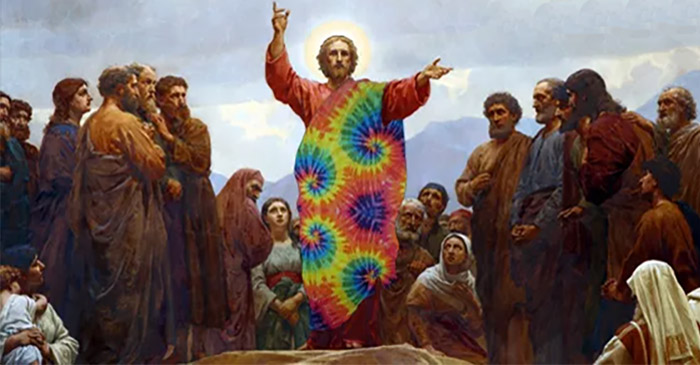 Right-wingers keep going on and on about how much they love Jesus Christ. They see him as their “personal” Savior. But when you read the following 20 quotes from the New Testament, you’ll wonder what Bible they’re reading.

Dictionary.Com defines the word “Christian” as people who follow Jesus Christ’s teachings…or at least have something to do with Him:

So, a Christian is a person who tries to act like Jesus Christ or at least follow His teachings? Alas, this definition doesn’t sound at all like the GOP’s so-called “Christians” we keep reading and hearing about in the news.

Do you know any right-wing Christians who truly follow Jesus Christ?

Jesus clearly favors an egalitarian society. Yet the conservatives have done everything they can to promote public policies that steal from the poor, give to the rich, and screw the middle class. The GOP’s stubborn votes against food stamps and rejection of state Medicare expansions proves they don’t even care about the people who voted them into office.

(19) “Judge not, that ye be not judged. For with what judgment ye judge, ye shall be judged: and with what measure ye mete, it shall be measured to you again. Matthew 7:1-2 KJV]

Jesus Christ commands his followers not to be judgmental towards their neighbors. Yet these right wingers can’t stop themselves from making arbitrary judgments about nearly everyone:  LGBTs, single moms, people of color, immigrants, non-Christians, poor people, and just anyone who isn’t white, rich, male, and “Christian.”

(18) “And why beholdest thou the mote that is in thy brother’s eye, but perceivest not the beam that is in thine own eye?” [Luke 6:41 KJV]

Jesus Christ’s famous quote about hypocrisy back in The New Testament times explains why these right-wing Christians say one thing and mean another. They talk about the “sanctity of marriage” between “one man and one woman.” Yet their leaders cheat on their spouses, seek gay sex on the down low, talk obsessively about rape, cheat on taxes, abuse drugs (prescription or not), and engage in illegal acts. They’re also  the first to throw a non-violent, first-time drug offender in prison, or claim a rape victim was “asking for it.”

(17) “Blessed are the peacemakers: for they shall be called the children of God.” [Matthew 5:9 KJV]

Jesus Christ preached peace, love, and kindness to his followers. But these conservative Christians are always the first to blast the trumpets of war. If they had their way, we’d still be in Afghanistan and Iraq, plus we’d be sending U.S. armed forces into Palestine, the Ukraine, and our local homeless encampments.

(16) “Behold the fowls of the air: for they sow not, neither do they reap, nor gather into barns; yet your heavenly Father feedeth them. Are ye not much better than they?” [Matthew 6:26]

If the previous quotes make Jesus Christ sound mildly liberal, this one makes Our Savior sound like a Goddamned hippie Communist. Right-wing Christians love heaping scorn on people who get help from the U.S. government, with no thought to whether their troubles are temporary or they’ve paid into the system. Even a lot of left-leaning Democrats demand that people on welfare be held “accountable.” Yet here’s Jesus saying that we should all be fed and cared for — regardless of our morals or how hard we work — just because we exist and God loves us. And as for those lazy, do-nothing “fowls of the air,” Jesus doesn’t even think we worker bees are any better than them.

Unlike today’s conservative Christians, who eagerly serve in the vanguard of the GOP’s war on women, Jesus Christ has no regard for double standards that hold men and women to different rules. At least four women — his mother, Mary Madgelene, and the sisters Mary and Martha — were beloved members of his inner circle. When a crowd gathered to stone a woman to death for the “crime” of adultery, Jesus stopped them dead in their tracks by demanding that the person without sin cast the first stone.

How can a conservative so-called “Christian” read this passage and keep voting for people who give tax cuts to the rich, while slashing programs that feed families, care for the elderly and disabled, house the homeless, provide healthcare, protect consumers, and keep our air and water clean?

(13) “Then Jesus went about all the cities and villages, teaching in their synagogues, preaching the gospel of the kingdom, and healing every sickness and every disease among the people.” [Matthew 9:35]

Jesus Christ famously roamed the Holy Land giving free healthcare to everyone in need. Even many non-Bible readers are familiar with Our Savior’s healing exploits. Yet, His conservative “Christian” followers in Congress are adamantly opposed to giving Americans access to healthcare. Instead, they waste U.S. taxpayers’ time and money over and over again trying to repeal the Affordable Care Act (ACA) even though their GOP lawmakers helped design the program, and their 2012 presidential candidate, Mitt Romney, had great success with a similar program during his tenure as Mass. state governor. Go figure.

(12) “Even so ye also outwardly appear righteous unto men, but within ye are full of hypocrisy and iniquity.” [Matthew 23:28 KJV]

This biblical passage comes straight from the Savior’s mouth, and describes our country’s conservative Christians to a tee(minus some of the other things they’re “full of”).

(11) “And found in the temple those that sold oxen and sheep and doves, and the changers of money sitting: And when he had made a scourge of small cords, he drove them all out of the temple, and the sheep, and the oxen; and poured out the changers’ money, and overthrew the tables; And said unto them that sold doves, Take these things hence; make not my Father’s house an house of merchandise.” [John 2:14-16 KJV]

Unlike our Mammon-worshipping conservative Christians, Jesus Christ clearly loathes capitalism. Pretty much the only time we ever see Jesus totally lose his cool and go into an Incredible Hulk-like rage is when he returns to Jerusalem with his disciples, and finds the Temple clogged with bankers and vendors. He doesn’t just yell at them, He totally goes apesh*t, wrecks their booths, and drives them out with whips He somehow manages to improvise and fashion on the spur of the moment. One can only imagine how Jesus would feel about Wall Street, the Koch brothers, and ALEC.

If you’ve got any doubt about how Jesus Christ would feel about income inequality, the Supreme Court’s Citizens United ruling, or rich CEOs raking in huge profits while crusading against a long-overdue minimum wage hike, this passage makes it pretty clear that making profits at other people’s expense gives you bad karma in the Great Beyond.

When Jesus Christ’s adoring crowds asked which of the 10 Commandments are the most important ones for them to follow, Jesus turned around and changed the rules. He said that if we first love God, and then love our neighbor, the rest would follow naturally. It’s hard to see how denying gays the right to marry and cutting anti-poverty programs follows Jesus’ teachings. Yet, our conservative “Christian” lawmakers insist this is what we should do.

(8) “And when thou prayest, thou shalt not be as the hypocrites are: for they love to pray standing in the synagogues and in the corners of the streets, that they may be seen of men. Verily I say unto you, They have their reward.” [Matthew 6:5 KJV]

Conservative Christians claim to love Jesus, and seem to adore shouting their faith from atop their soap boxes any chance they get. But the real Jesus Christ scorned these showy – and often phony – displays of piety, and went out of his way to preach against them.

(7) “But if ye had known what this meaneth, I will have mercy, and not sacrifice, ye would not have condemned the guiltless.” [Matthew 12:7 KJV]

Jesus Christ always preached mercy for women, children, sinners, criminals, the poor, and even his own enemies. Yet, today’s conservative Christians demand  the death penalty and insist that children who commit crimes should be charged as adults.

Jesus Christ always wanted to feed people and extend hospitality to strangers, no matter what their circumstances. Yet, conservative, so-called “Christians” seek to cut back on food stamps and deport immigrants — or bar them from entry.

(5) “And he said, Woe unto you also, ye lawyers! for ye lade men with burdens grievous to be borne, and ye yourselves touch not the burdens with one of your fingers.” [Luke 11:46 KJV]

Thank you, GOP lawmakers, for passing laws and promoting policies that make things harder for most of your fellow Americans.

(4) “For unto whomsoever much is given, of him shall be much required: and to whom men have committed much, of him they will ask the more.” [Luke 12:48 KJV]

Unlike today’s right-wing so-called “Christians,” Jesus Christ sympathized with those who work day-to-day to scrape by, and preached that they would get their reward. Meanwhile, Republicans refuse to even consider raising the minimum wage to keep up with the cost of living.

(2) “For I was an hungred, and ye gave me meat: I was thirsty, and ye gave me drink: I was a stranger, and ye took me in: Naked, and ye clothed me: I was sick, and ye visited me: I was in prison, and ye came unto me. Then shall the righteous answer him, saying, Lord, when saw we thee an hungred, and fed thee? or thirsty, and gave thee drink? When saw we thee a stranger, and took thee in? or naked, and clothed thee? Or when saw we thee sick, or in prison, and came unto thee? And the King shall answer and say unto them, Verily I say unto you, Inasmuch as ye have done it unto one of the least of these my brethren, ye have done it unto me.” [Matthew 25:34-40 KJV]

The Christian Right keeps ranting about how raising taxes to pay for programs that help the poor and folks who find themselves in a jam is somehow like forcing us into slavery. But Jesus Christ’s views on feeding, clothing, and helping people in need is unequivocal: He sees it as directly serving Him.

(1) “Then shall he say also unto them on the left hand, Depart from me, ye cursed, into everlasting fire, prepared for the devil and his angels: For I was an hungred, and ye gave me no meat: I was thirsty, and ye gave me no drink: I was a stranger, and ye took me not in: naked, and ye clothed me not: sick, and in prison, and ye visited me not.” [Matthew 25:41-43 KJV]

In case the previous half of this passage doesn’t make Jesus Christ’s views abundantly clear, Our Savior gets more specific. He says that on Judgment Day, He will look askance at people who refused to help those less fortunate than themselves. Not only that, Jesus Christ will curse them and cast them away “into everlasting fire.” It’s shocking that conservative “Christians” keep ignoring this. Maybe someday, they’ll find religion.

Featured image: Sermon on the Mount, by Henrik Olrik ca. 1880 with tie-dye added. A version of this first appeared on Addicting Info.