The 24 Best Halloween Photos from the Resistance (Images)🎃🌊 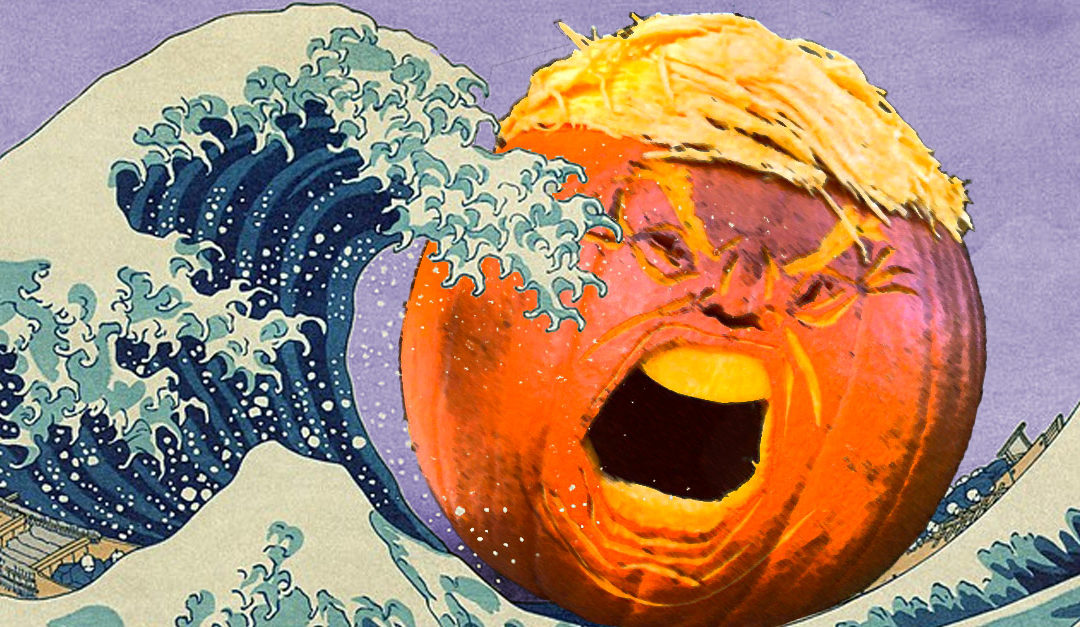 We’ve got less than a week to go until the 2018 election… And these Halloween photos from the Resistance should keep us fired up. One of the things I love about my fellow resisters is how fun and creative so many of us are. Especially when it comes getting the anti-Trump administration message across.

These Kids are Woke AF

The photographer from Charlotte, North Carolina also posted this.

But they’re not the only ones.

2.  All these tiny Kaepernicks show someone’s raising these kids right!

3. And three cheers for this little one’s mom.

hey mom you are *killing* it #HappyHalloween2018 pic.twitter.com/hvmqClJJnv

Let’s hope it sinks in.

Some of the best Halloween photos from the resistance show folks who’ve gone all out… And I mean, all out … With their Blue Wave costumes.

Let’s keep the enthusiasm going through Tuesday and beyond.

4. Danny, Sahil, and their pooch with the glowing eyes have outdone themselves.

5. Tired of seeing orange? Paint your pumpkins blue! This trend started in 2014 to raise consciousness about food allergies. It emphasized having (non-food) alternatives for kids who can’t eat the candy we buy.

Those pumpkins are more like a teal blue. Now, Blue-Wavers are using a deeper, more blue blue for a new purpose.

6. Who else thinks DC or Marvel should create a Blue Wave character!

I’m the greatest superhero there ever was!
I’m the blue wave that will save the world on November 6th #Halloween18 #HappyHalloween2018 #BlueWaveComing2018 #BlueWave2018 #bluewave pic.twitter.com/JpkmKCxaoJ

7. If we had a #BlueWave2018 pageant, this gorgeous outfit would win hands down.

My friend @robin32277 is the #BlueWave #HALLOWEEN pic.twitter.com/xz0SvA9aqr

8. Some folks are even blue-waving at work.

9. If Captain America were a dog, I bet he’d look like this heroic pooch.

Mom let me put on my costume on a little early so that #CaptainAmerica can remind everyone to get out and vote! @ChrisEvans #EarlyVoting #BlueWave pic.twitter.com/WSIcnLFEFG

Get Out the Vote (#GOTV)

These #GOTV Halloween photos from the resistance make an important point. There’s only one way to “cast a disappearing spell” on the GOP. Go out and VOTE!

I’m the “Blue Wave”—get it?! Happy Halloween! Make sure to get out and #VOTE next Tuesday! #BlueWave #GOTV #Halloween pic.twitter.com/kkMAXOY5wv

12. It’s never too early to dress up when you want to get the message out.

Here's a friendly reminder from a cute pup to #VOTE. Ramp up your #GOTV efforts by canvassing in costume tonight! #TrickorVote #BlueWave pic.twitter.com/KS7mBHNnRj

13. Across the country, volunteers are knocking on doors to get out the vote in 2018. Even on Halloween! Now, that’s dedication.

14. Wouldn’t you love to see those (literally) lit T-shirts at night?

No, really. #VOTE @PodSaveAmerica #GunSenseVoter @MomsDemand #BlueWave #VoteSaveAmerica moms in the ‘burbs are ready and fighting even on Halloween! pic.twitter.com/HYzfg667fh

More of the Best Halloween Photos from the Resistance

15. When Sasha Sorum saw photos from the Halloween White House, she responded with a photo of her own. It shows her and her friend wearing a jacket like the infamous “I Don’t Care” one Melania wore. Only it says, “I DO Care and So Should U.” Well done.

16. Why is this jack-o-lantern blazing, “Yes on 1631”? This initiative would make Washington the first state to fight climate change by charging for carbon emissions. The New York Times reports it’s one of Five Midterm Votes That Could Have an Outsize Impact on Climate Change.

Knock out carbon-emitting demons as effectively as a patronus dispatching a horde of dementors. Vote #Yeson1631!#HappyHalloween2018 pic.twitter.com/wfQeEuAZkF

17. That moment when Princess Leia joins the resistance… When NBC tweeted bizarre footage from a White House event with kids in Halloween costumes, Judy Schear had a hilarious response.

18. Here, one of the best Halloween photos for the Resistance came from a Republican. GOP Rep. Mark Sanford’s photo below got lots of derisive retweets for obvious reasons. What kind of monster gives out US Constitution leaflets instead of candy?

Happy Halloween. Accordingly, Pocket Constitutions are at the ready for today’s trick-or-treaters. pic.twitter.com/hnQTfeCPHy

19. But that’s not the scariest thing going on this Halloween.

What’s orange on the outside, hollow on the inside, & should be thrown out in November? Trumpkin pumpkins, of course.

20. This awesomely screamy one originally came from Dave Weber via Flickr (CC by 2.0), and now it’s making the rounds on Twitter.

22. But who needs Trumpkins when we’ve got Beto O’Rourke

Under the guise of Halloween, my family is readying ourselves to join the Rebel Alliance. Won’t you join us? #resist pic.twitter.com/q6j11XrMzb

Got any anti-Trump Halloween photos from the Resistance? Post them in the comments below!