If People Think This Is ‘Normal,’ Then We Seriously Need to Rethink ‘Normal’ 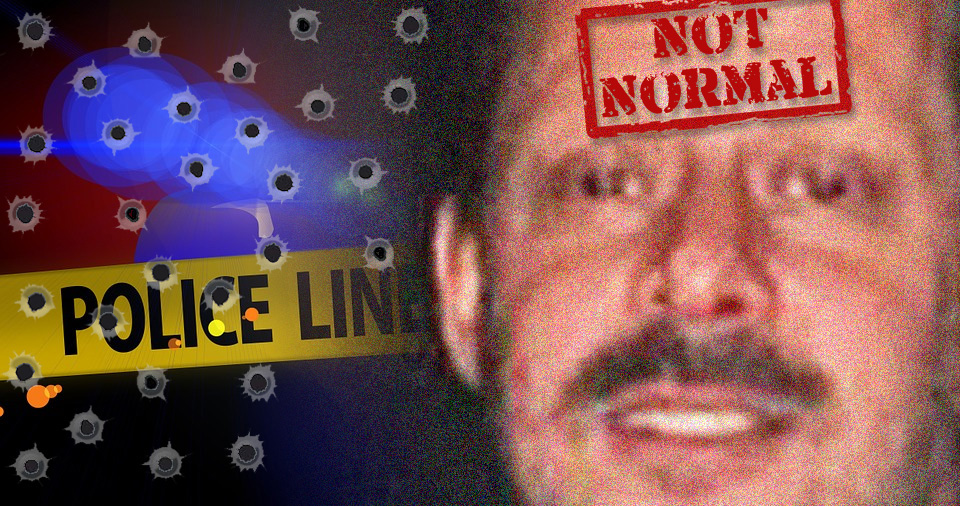 Stephen Paddock murdered 58 people and injured over 500 more in the Las Vegas shootings, then killed himself. Yet people say he seemed “normal.”

What is “normal,” exactly? It seems like whenever we have a mass shooting — a phrase which should not sound not sound normal, but does — the killer’s almost always some angry white guy who everyone says seemed totally “normal” … Until that one day when he just “snapped.”

No. This is not normal.

As a society, we seriously need to take a long, hard look at what we see as “normal.” I’m not saying that anyone could have known Stephen Paddock would embark on this murderous rampage. But there’s no way in hell he — or any of the other white terrorists who keep coming out of the woodwork to wreak havoc and horror every month — should be described as “normal.”

Take Christopher Sullivan, the manager at Guns & Guitars in Mesquite, Nev. for example. He said Stephen Paddock seemed like “a normal fellow, a normal guy, nothing out of the ordinary.” Nope. “Nothing out of the ordinary” other than the fact that Paddock, as the New York Times reports, bought not one but three guns from him. He had no criminal record, purchased those guns legally, so apparently, buying three guns is perfectly normal.

Oh, and then there’s Stephen Paddock’s former neighbor from back when he lived in Florida. She told reporters, “He seemed normal, other than that he lived by gambling.”

There was “absolutely no indication he could do something like this,” Paddock’s shocked and appalled brother Eric told The Daily Mail. “He was just a guy. Something happened, he snapped or something.” The last time he and his mother, who both live in Florida, heard from Stephen Paddock was when he texted them during Hurricane Irma. “We have no idea,” Eric Paddock declared. “We’re horrified. We’re bewildered and our condolences go out to the victims.”

He also insisted his brother had no involvement with hate groups or religious groups “as far as I know.” He then added, “Yes, he had a couple of guns. I mean it’s legal to own a couple of guns in the United States.”

And no, we’re not talking about “a couple of guns.” It was more like 16 guns and over 200 rounds of ammo in the hotel room, worth $50,000-$60,000. And then police went to Stephen Paddock’s home in Mesquite and found a cache with explosives, another 18 guns, and thousands of rounds of ammunition. How in the world did this guy amass all those weapons in his home on a quiet cul-de-sac in a nice retirement community without his neighbors or his girlfriend — who lived with him — noticing? According to news reports, she’s now visiting the Philippines.

And the gun shop owner told CNN, “He was just a normal guy who walks into my door 50,000 times a day.” You can’t make this stuff up.

Gun shop owner who sold to Vegas shooter: ‘He was just a normal guy who walks into my door 50,000 times a day’ https://t.co/i3wy9UhvW2

CNN claims the massacre “remains a mystery.” Sheriff Joe Lombardo from Las Vegas Police said, “This is an individual who is described as a lone wolf. I don’t know how it could have been prevented.” After all, he didn’t have any prior criminal record and seemed…perfectly normal.

“I don’t know how it could have been prevented.” Um…How about making it less easy for people to hoard massive stockpiles of guns, ammo,  and military-grade weapons? Fewer right-wing politicians and pundits spewing paranoia, violence, and hate would also be a huge help. Other Western democracies don’t have these constant mass shootings, only the U.S.

‘No Way To Prevent This,’ Says Only Nation Where This Regularly Happens https://t.co/LMg4mj6LFn pic.twitter.com/FZuB4iWFOi

To be fair to Stephen Paddock’s family, neighbors, and acquaintances, there really is no way they could know he’d go on a murder binge. Nor did police have any reason to keep an eye on him — other than all those military-grade weapons he’d stockpiled — as he had no criminal record. That’s how stochastic terrorism works. G2Geek coined this term in a 2011 Daily Kos post after the Tucson, Ariz. shooting that left Rep. Gabrielle Giffords (D-Ariz.) with a severe brain injury.

As G2Geek explains, “Stochastic [random] terrorism is the use of mass communications to stir up random lone wolves to carry out violent or terrorist acts that are statistically predictable [we know they’ll happen] but individually unpredictable [we don’t know who will do it or when and where a mass shooting will happen].”

Conspiracy theories, hate mongerers, and right-wing rage aided and abetted by the Republican Party all but guarantee that someone will go off the rails and plan an attack on a regular basis. And these planned attacks are likely to succeed because it’s so easy to buy rapid-firing machine guns and ammunition. Apparently, fear and terror serve the GOP’s and the NRA’s purposes. Otherwise, they’d pass the commonsense gun safety laws the American public has been begging for since the Sandy Hook massacre in 2013.

Valerie Tarico, a psychologist from Seattle, Wash, calls the process of stochastic terrorism “perversely brilliant.” She then explains how the toxic rhetoric and easy availability of lethal weapons leads to random acts of terrorism, which the Republicans claim we can’t stop because they’re so random.

1. A public figure with access to the airwaves or pulpit demonizes a person or group of persons.
2. With repetition, the targeted person or group is gradually dehumanized, depicted as loathsome and dangerous—arousing a combustible combination of fear and moral disgust.
3. Violent images and metaphors, jokes about violence, analogies to past “purges” against reviled groups, use of righteous religious language—all of these typically stop just short of an explicit call to arms.
4. When violence erupts, the public figures who have incited the violence condemn it—claiming no one could possibly have foreseen the “tragedy.”

In The Intercept, Shaun King explains how because Stephen Paddock is white, we can’t even address the mass shooting as an act of terrorism.

Paddock, like the majority of mass shooters in this country, was a white American. And that simple fact changes absolutely everything about the way this horrible moment gets discussed in the media and the national discourse: Whiteness, somehow, protects men from being labeled terrorists.

In other words, “white” is the default. “White” is “normal.” All black people have to do is raise a fist or kneel during the National Anthem and right-whingers whip themselves up into a frenzied rage. But when a white man spews hate speech or has a gun fetish, people just think he’s like someone’s “totally normal” cranky uncle. All the mass murderers below were described as “disturbed loners,” a “lone wolf,” or “mentally ill.” The word “terrorist” is rarely used when the mass murderer is white.

White privilege extends even to terrorists and mass murderers, who don’t get treated or described as criminals. Instead, they’re called “the gunman” or a “lone wolf.”

PRIVILEGE ALWAYS STANDS in contrast to how others are treated, and it’s true in this case, too: White men who resort to mass violence are consistently characterized primarily as isolated “lone wolves” — in no way connected to one another — while the most problematic aspects of being white in America are given a pass that nobody else receives.

The GOP’s president Donald Trump tweeted condolences to the victims and families. But, as Shaun King points out, he didn’t call him a “son of a bitch” like the NFL anthem protesters. Nor did he come up with a mean nickname or sign an executive order banning all travel from white, Christian nations.

Time and time again, the American people demand commonsense gun laws and an end to the terror and mass shootings. And every single time, GOP lawmakers refuse. Make no mistake. The Republican Party has devolved into an amoral, lawless murder cult that recognizes no standards of truth or rule of law. At this point, they seem like they’re happy to let anyone do anything to anyone as long as they have the power, money, and weapons to do so.