‘I Can’t Afford My Wife’: Texas Dad Reveals Shocking Truth About How We Shortchange Women (VIDEO) 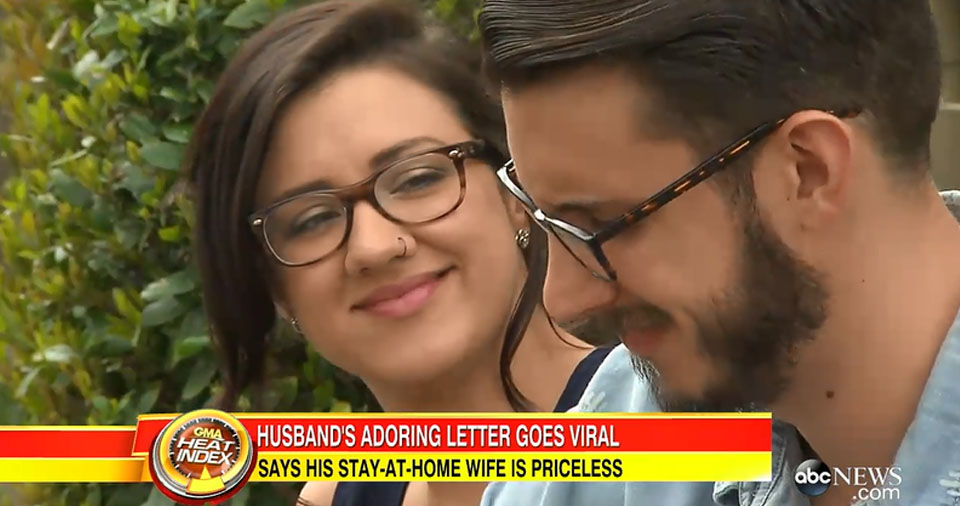 How much should a stay-at-home mom get paid for all the work she does?  Steve Nelms did some research and realized the shocking truth: He can’t afford his wife.

In Nelms’ blog post “Fathers, you can’t afford a stay-at-home mom,” he breaks down all the various tasks his wife Glory does over the course of a day while keeping house and looking after their two-year-old son Ezra. Then, he looks up how much he’d have to pay someone to do all these things.

Steve Nelm’s conclusion? He’d have to pay a whopping $67,860 per year for all the things his wife does as a stay-at-home mom — well over his yearly income. Nelms takes care to add that he’s not trying to over-simplify, quantify or devalue motherhood. He’s just acknowledging that raising children and running a household is hard work that requires specialized skills, and that stay-at-home moms like his wife deserve more credit.

I am in no way trying to simplify, objectify, or devalue the priceless love of a mother for her child. But let’s be real. Pay day feels good for a reason. Because you’re seeing your hard work appreciated in a tangible way that lets you “treat yo self”. And this is exactly why I can’t afford my wife being a Stay-At-Home Mom.

Here’s a chart with Nelms’ calculations on what a stay-at-home mom would be worth if she actually got paid for her work: If Glory worked outside of the home, they would have to pay a bare minimum of $67,860 per year to care for their son, feed themselves, and keep their household running. And — Nelms is quick to point out — this doesn’t even include laundry, financial services (many stay-at-home moms handle all the household finances), chauffeuring the kids around town, hosting play dates and guests, and other things that stay-at-home moms often do. 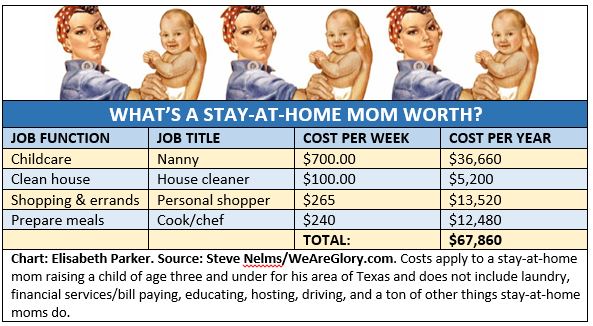 Infographic by Elisabeth Parker: What’s a stay-at-home mom worth?

Stay-at-home moms’ and women’s work is undervalued…And the same goes for men.

The numbers from Nelms’ informal report are quite shocking. In his part of Texas, a family with two working parents has to pay a minimum of $67,860 to do what a stay-at-home mom does. But the National Women’s Law Center reports the average working mother makes only $38,000. This means that many American families cannot afford to have both parents working.  Even as children get older and childcare costs go down, working families face huge obstacles starting with the fact that school schedules don’t match work schedules. And if you don’t have relatives, friends or neighbors who can watch the kids in a pinch, you’re sh*t out of luck.

And even in this day and age, wives often wind up as the default primary caregiver (even when she works outside of the home) because she makes less than her husband: An average of $38,000 to her husband’s $55,000 , to be exact. Furthermore, Nannies, house cleaners, and others who provide services to stressed out working parents also tend to be women who can barely keep their heads above water for what they get paid.

And finally, Nelms’ post has to make you wonder…if he doesn’t make enough to afford the various services middle class stay-at-home moms used to provide for America’s children, then he’s underpaid too! What would Nelms do if he were a single parent?

About Parenting reports there are 13.6 million single parents raising 22 million children. That’s right. A full 26 percent of our nation’s children under age 18 are being raised by single parents. Since most of these parents can’t afford the help they need — and often can’t even make ends meet — they must be stressed out as hell.

And of course most of these single parents — 82.2 percent — are women. The National Women’s Law Center explains how today’s low wages is making it harder and harder for the 7.4 million families headed by single moms to keep their heads above water.

Families like Steve and Glory Nelms’ — who can get by on a single income — also get put at a disadvantage by low wages. If the breadwinner gets laid off or goes through a business slump, the family won’t have a second income to get them through. Furthermore, the stay-at-home mom loses momentum in her peak career years, not to mention substantial income while staying home, to the tune of $1 million if you include 401K contributions, vacation pay, sick time and other benefits.

And — as Glory mentions in an interview with ABC News — staying home with young children can feel isolating, and it’s hard to adjust to losing that second paycheck right when you need it most.

Watch: Doting dad and husband Steve Nelms reveals to ABC the true worth of a stay-at-home mom.