Shameful: The NRA Gave These 10 Senators Over $42 Million to Block Gun Laws (Chart) 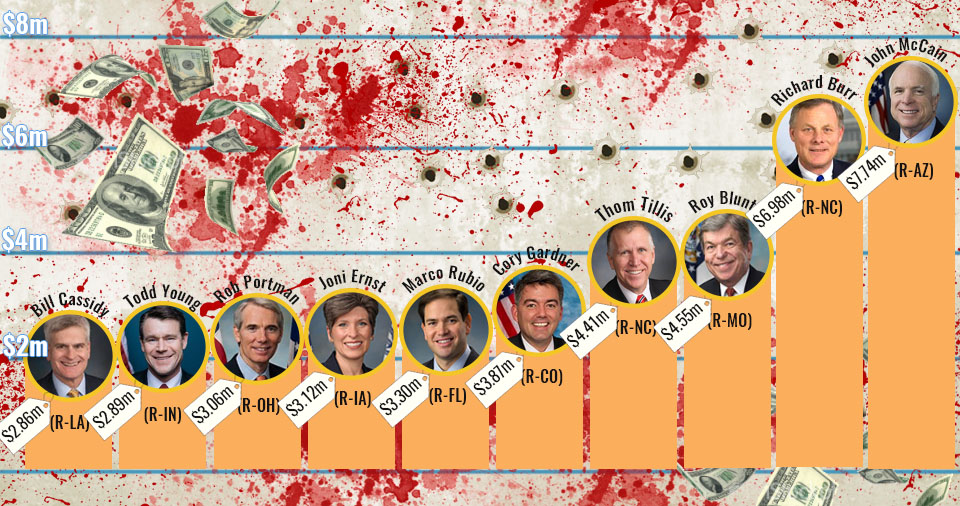 Why can’t we stop the mass shootings? The NRA and their bought-and-paid-for Senators have blood on their hands.

The Las Vegas massacre was the 337th mass shooting in the U.S. for 2017 and the year isn’t even over yet. 59 people died and 530 were injured after Stephen Paddock, the angry white man du jour, mowed concert-goers down in cold blood.

But once again, we get nothing from either the House or the Senate except for their empty “thoughts and prayers.” In December 2015 not one, but three gun bills failed to pass in the U.S. Senate after two horrific mass shootings in just one week.

How can Republicans (and a handful of Democrats) remain so cruel and indifferent to our grief, our horror, and our outrage? The public has been clamoring for tougher gun laws since the tragic Newtown shootings way back in 2012. It turns out the majority of people we send to Washington to address the kind of issues that are too big for citizens or local and state governments to handle are more afraid of the National Rifle Association than they are of angry voters or mass murderers getting their hands on assault weapons.

FACT: The gun violence rate in the US is exponentially higher than all other developed countries. #GunSense #ThoughtsAndPrayersAreNotEnough pic.twitter.com/d4nBQ9IoZH

Politifact has also found that public support for background checks has hovered around 90 percent for years.

So why don’t we have universal background checks on the books yet? In a word: Money. If blood is thicker than water, then money is thicker than blood. Money’s a potent motivator, the arms industry makes tons of it from gun-loving Americans, and they’re happy to share some of that money with our Senators and House reps.

All of the NRA’s top 10 funding recipients in the House and Senate are Republicans.

Open Secrets keeps a database and a spreadsheet with our House and Senate members and the campaign funds they receive from the NRA  (you can do a search to see how much your senators and representatives got). This includes direct contributions, money funneled through PACs, and donations from individuals via NRA-led fundraisers. Needless to say, we’ve got a lot of lawmakers raking in the blood money.

Here are the top 10 House members for NRA contributions.

The New York Times reports 95 out of the top 100 House members who receive cash from the NRA are Republicans.

The highest ranked Democrat in the House is Sanford Bishop (D-Ala.), who ranks 41st in career donations from the N.R.A. In the Senate, the top two Democrats are Joe Manchin of West Virginia and Patrick Leahy of Vermont, who rank 52nd and 53rd — behind every Republican but Dan Sullivan of Alaska.

In a video with Mic.Com, former Rep. Steve Israel (D-NY) explained how the gun lobby’s made it impossible for us to stop the mass shootings: “It out mobilizes us, it outflanks us, it outspends us, it out organizes us.”

Steve Israel: Why gun laws won't change in the US

Yet another horrific mass shooting won't do anything to change gun laws in the US.Former Congressman Steve Israel explains why.

In 2015 Scott Bixby from Mic.Com did a little sleuthing on the 50 U.S. Senators — Heidi Heitkamp (D-N.D.) and 49 Republicans — who voted down three gun bills. Sens. Rand Paul (R-Ky.) and Heitkamp didn’t receive a dime from the NRA directly or through PACs. But Mic.Com found the other 48 senators raked in a stunning $27,205,245 over the course of their careers.