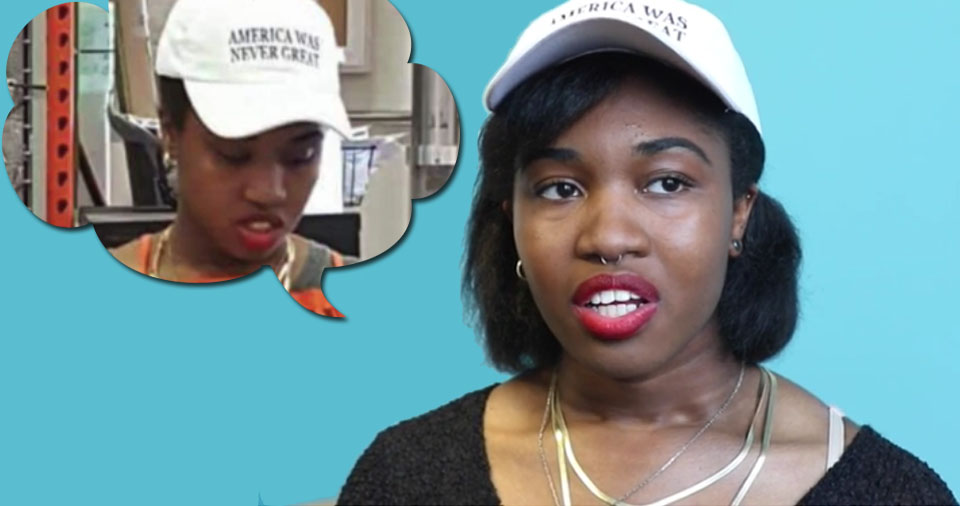 Krystal Lake got fed up with hearing Donald Trump promise to “make America great again” and decided to send a message of her own. On Sunday, the 22-year-old college student put on a baseball ball cap inscribed with the defiant words, “America was never great,” and wore it to her shift at a Home Depot in Staten Island, NY.

An outraged Donald Trump supporter snapped a photo and posted it on social media, where it went viral:

Angry customers slammed Home Depot’s Facebook page demanding that they fire Krystal Lake and her supervisors or they’ll take their business to Lowes. 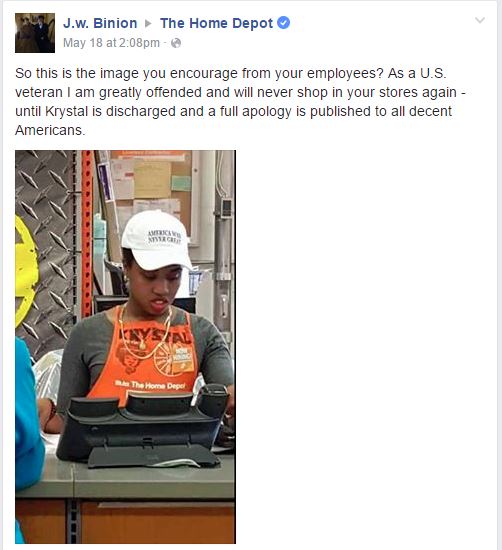 Right-wingers are always whining about “political correctness” and going on about their right to free speech while called out on hurling insults against blacks, Latinos, Muslims, women, disabled people, LGBT people and others. But when someone like Krystal Lake dares to point out the obvious — That America hasn’t really been all that “great” for many of us — the Trumpkins go bonkers.

It never seems to occur to any of these people to actually approach Krystal Lake and engage her in a friendly, reasonable conversation about why exactly she thinks “America was never great.” Because, really, when white people say they want to “make America great again,” what they really want is to go back to the 1950s when white men prospered at other groups’ expense instead of pushing for a more broadly-shared prosperity that would raise all of our boats and still leave the one percent with plenty of ill-gotten gains for themselves.

In an interview with Staten Island Live, Krystal Lake explained:

“The point of the hat was to say America needs changing and improvement. I don’t think it’s a positive message to say, ‘Let’s look to the past.’”

A spokesman from Home Depot added:

“We appreciate and understand the concerns of our loyal customers. In terms of the message, our associates are not permitted to wear items that reflect political statements. Unfortunately, no one on our management team saw her wearing the hat — otherwise, they would have had her remove it immediately.”

But telling Krystal Lake to remove her hat may have led to another PR disaster for Home Despot, given that she says she sees her fellow staffers wearing their Vote Trump pins all the time. She told reporters that, despite the death threats, she will “definitely” wear her hat again.

“I feel it offended a lot of people because a lot of Trump supporters live in Staten Island. Trump is very rash and in your face, but when someone else has a message against him, his supporters can’t take the criticisms.”

And who did Krystal Lake vote for in the New York primaries? Bernie Sanders. You go girl.

Featured image: Composite with video screengrabs via Staten Island Advance. A version of this post first ran on Liberals Unite.