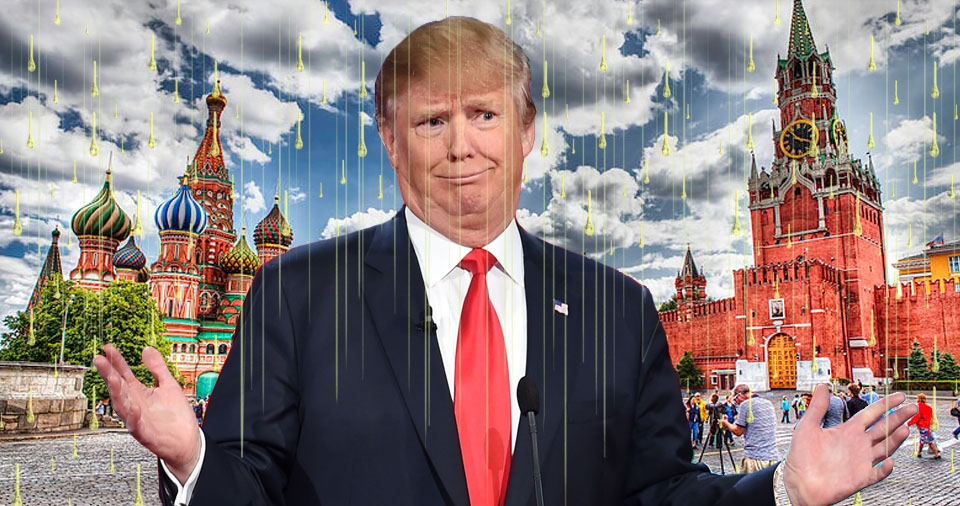 When it’s not raining men, golden showers will do. A dossier on Donald Trump’s dealings with Russia may not all be true, but it sure feels “truthy.”

On Tuesday night, we reported on some classified documents shown to President Barack Obama and the president-elect that contained some rather alarming reports from Russian spies on Mein Trumpf’s financial and, erm, personal activities. Make that very personal. And gross.

The good news from the report by U.S. intelligence is, although the Kremlin cultivated Donald Trump for five years, he declined “various sweetener real estate business deals offered him in Russia.” The bad news is he may have taken some other unsavory favors that involved Russian prostitutes giving him “golden showers”: slang for peeing on or in front of him.

“According to Source D, where sh/he had been present, TRUMP’s (perverted) conduct in Moscow included hiring the presidential suite of the Ritz Carlton Hotel, where he knew President and Mrs. OBAMA (whom he hated) had stayed on one of their official trips to Russia, and defiling the bed where they had slept by employing a number of prostitutes to perform a ‘golden showers’ (urination) show in front of him.”

Although reporters have not been able to verify the golden showers story, this and other activities were likely caught on video.

“The hotel was known to be under FSB [a Russian spy agency.] control with microphones and concealed cameras in all the main rooms to record anything they wanted to.”

Another U.S. intelligence source confirmed the incident at the Moscow Ritz Carlton and says s/he believes ithappened in 2013.

“Source E provided an introduction for a company ethnic Russian operative to Source F, a female staffer at the hotel when TRUMP had stayed there, who also confirmed the story.”

Oh, but wait. It turns out the golden shower isn’t the only thing the Kremlin’s got on Donald Trump.

“Speaking separately in June 2016, Source B (the former top-level Russian intelligence officer) asserted that TRUMP’s unorthodox behavior in Russia over the years had provided the authorities there with enough embarrassing material on the now Republican presidential candidate to be able to blackmail him if they so wished.”

According to CNN, Russia gathered intelligence against both the Democrats and the GOP, but wound up only targeting Hillary Clinton and the Democrats.  The report also states Donald Trump’s team and operatives from Russia exchanged information throughout the campaign.

I believe him now when he says he knows how trickle-down economics work. #GoldenShowers pic.twitter.com/XcopTJ6Jcq

5. Sweet nectar of the gods!

6. A golden shower? Is there any other kind?

7. #GoldenShowers may explain why Donald Trump is so orange.

"We're going to build a stall, and Mexico is going to pay for it" #GoldenShowers

"Hey Donald, what are your plans for your urine-augurat-"#goldenshowers pic.twitter.com/y0ASi4mZcu

12. Every cloud has a silver lining…

The only thing that gives me hope in the future of humanity is that #ObamaFarewell is trending above #goldenshowers right now.

If I was an American flag, I'd be burning myself at this point. Thankfully #Trump might be there to put me out. #Peeotus #goldenshowers

14. When the Russians hand you lemons, make “Lemonade.”

When Trump can't respond to all the memes individually so he drops his response album. #GoldenShowers pic.twitter.com/i6BHXQu3G8

"Joe you can't just mutter 'peetus' under your breath when we meet him"
"I don't see why not. Peetus. It's his name."#GoldenShowers pic.twitter.com/mTZ0V0KI5g

You can't spell TRUMP without a "Pee." #GoldenShowers

17.  Dear Trump trolls, “turns out that wasn’t liberal tears you were drinking.”

19. “Nobody has more respect for women.”

20. And Republicans are worried about explaining gay marriage?

Trump voters who were concerned about explaining gay marriage to their children realizing they have to explain #GoldenShowers now pic.twitter.com/FLPgAkeWCq

As Donald Trump would say…”Sad.”