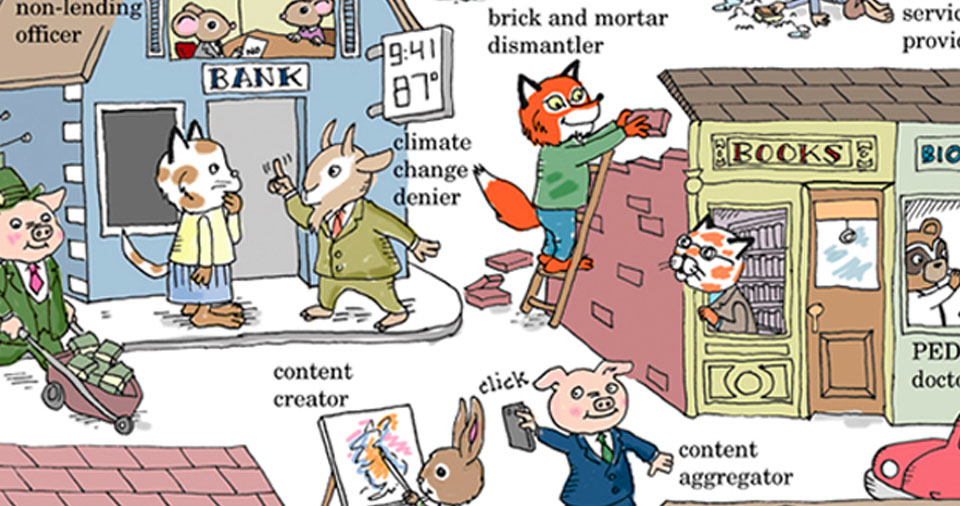 Remember Richard Scarry’s “Busytown” children’s books, games, and TV series with the winsomely-drawn cartoon farm animals doing all kinds of cool, fun,  and useful jobs? The hugely popular franchise launched in 1968, with Scarry’s “What do People Do All Day,” and got two generations of American kids excited about growing up, joining our nation’s workforce, and participating in our economy. In a way, Busytown served as a microcosm for how many of us see this country: A cheerful, bustling, prosperous place where everyone can find a well-paying job and make a life for themselves.

That was towards the end of the post-World War II economic expansion of 1945-1973. Mid-20th Century America was so prosperous — and prosperity was so broadly shared — we took for granted that our incomes would keep rising with our swiftly increasing, technology-enhanced productivity. Steady, full-time jobs that paid the bills no longer even felt good enough. We began to dream of careers that fulfilled our interests and passions. In 1970, Richard Nelson Bolles came out with “What Color Is Your Parachute,” the best-selling career guide and grown up version of “Busytown.” In 1989, Marsha Sinetar followed up with the audaciously titled “Do What You Love, And The Money Will Follow.”

Then, something went horribly wrong, as a backlash against unions, “big government,” and Keynesian economics took hold. Our productivity gains continued, but fewer of us have shared in the resulting wealth. Well-paying, secure, middle-class jobs grew harder and harder to come by. Back in Scarry’s time, writers and illustrators didn’t need a best-selling book or syndicated column or comic strip to make a decent living: They could work for an ad agency, magazine, or book publisher. Or they could find a niche and freelance. Now, members of what the economist Richard Florida calls “the creative class” compete for page views, Facebook likes, and YouTube subscribers like Māori children diving for tourist’s pennies back in the 1960’s.

Perhaps that’s why Ruben Bolling, the cartoonist and creator of “Tom the Dancing Bug” comic strip came up with his scathing parody, “Richard Scarry’s 21st Century Busytown.” Featured on BoingBoing, this hilarious re-imagining of Busytown jobs for the 21st century seeks to grab attention and bring us into Bolling’s Inner Hive subscription service.

In the 21st century, the future only looks rosy for people in the top one percent. If you’re a one-percenter, you don’t even need to worry about getting a job, because you and your friends at the top control between 35 and 37 percent of our country’s wealth, according to CBS MoneyWatch. But although Mother Jones reports the one percent’s wealth has increased from $100 trillion to $127 trillion in just three years, these rich folks aren’t creating all those jobs conservatives promised. Why? Because, as wealthy entrepreneur Nick Hanauer and Business Insider explain at length, consumers — not rich people — create jobs when they have enough disposable income to raise demand for products. 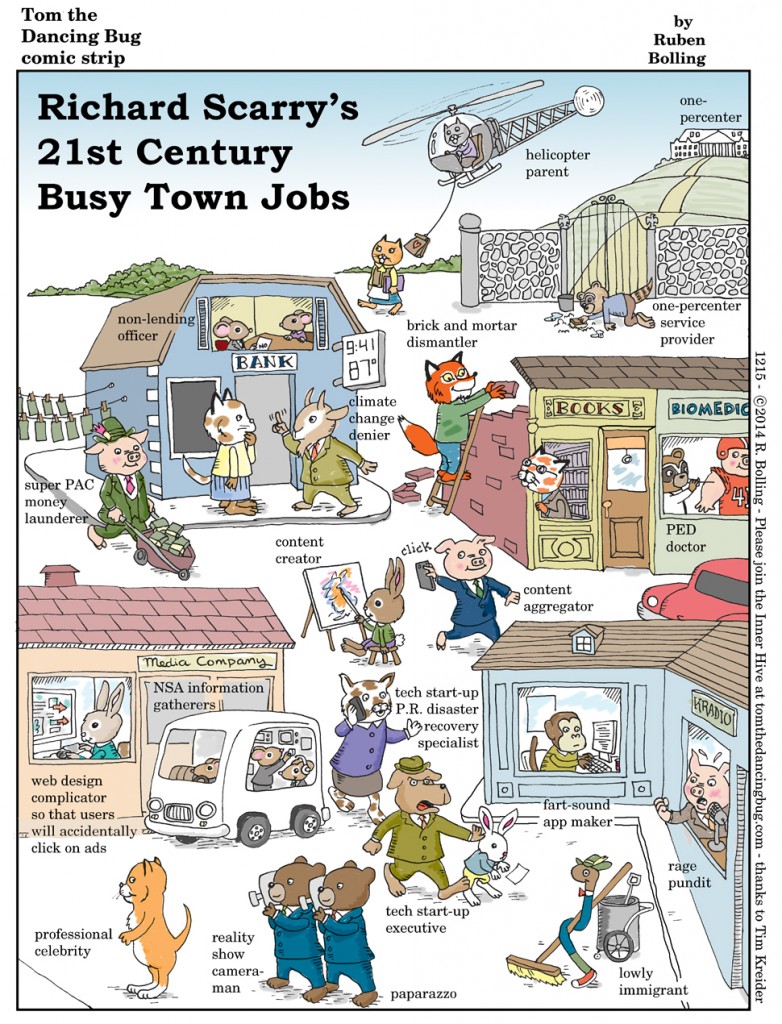 Featured image: Screen grab/Ruben Bolling’s “Richard Scarry’s 21st Century Busytown Jobs” via BoingBoing. If you want more like this, click here to subscribe to Bolling’s Inner Hive (just $11.95 for 6 months, and no, he’s not paying me).

These 21st Century “Busytown” Jobs Are Hilarious, But The New Economy Is Scary As Hell.

Bolling’s list of 21st century jobs is hilarious, but also disturbingly real. Let’s take a look at a few of these so-called jobs.

Featured image: Screen grab/Ruben Bolling’s “Jobs of the 21st Century” via BoingBoing. A version of this article originally appeared on Reverb Press.