Reaganomics Creator on Trump Tax Cuts: Virtually Everything the GOP Says About Taxes ‘Is Hogwash’ 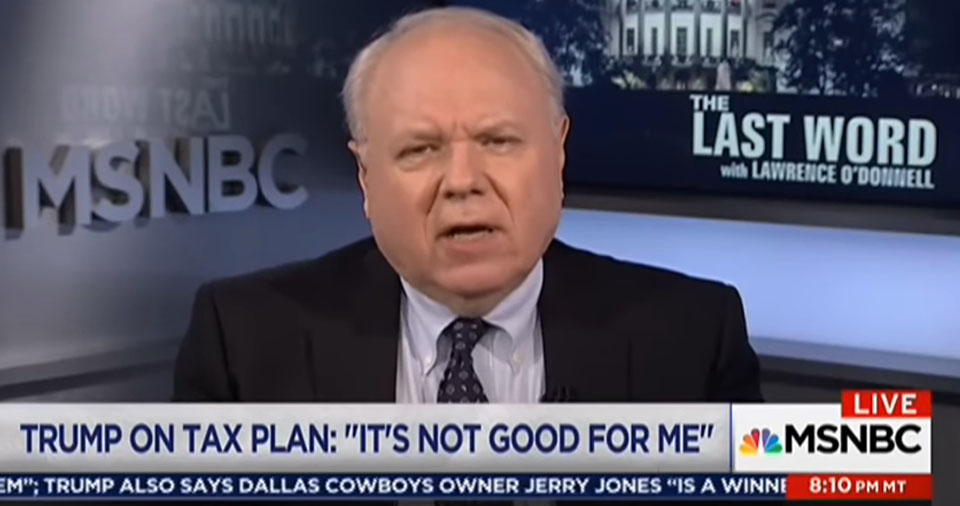 You know something’s seriously wrong with Donald Trump and the GOP’s tax plan when Bruce Bartlett — one of the minds behind Reaganomics — thinks it’s a load of hooey.

“I helped create the conservative gospel of slashing taxes,” Ronald Reagan advisor Bruce Bartlett bluntly wrote in an op-ed for USA Today. “But virtually everything Republicans say about taxes today is hogwash.”

He went on to say that while he worked for Rep. Jack Kemp (R-New York) in the 1970s, he helped evolve the tax-slashing economic theories the GOP’s still pushing today. But things were different in the late 1970s-early 1980s. Now, Bruce Bartlett insists, supply-side economics has “long outlived its usefulness and is now nothing but dogma completely divorced from reality.”

Ouch. And what this former Ronald Reagan staffer wrote doesn’t even hold a candle to his scorching comments on MSNBC.

Bruce Bartlett added there once was a time when “Republicans genuinely cared about the budget deficit,” and “were actually willing to raise taxes and oppose tax cuts to reduce it.” He also says the way Republicans talk about the taxes we pay is misleading. Our statutory tax rates may seem high, but our effective tax rates (what we actually pay) are much lower.

“Virtually everything Republicans say about taxes today is a lie,” Bruce Bartlett explained.

Tax cuts and tax rate reductions will not pay for themselves; they never have. Republicans don’t even believe they will, they are just excuses to slash spending for the poor when revenues collapse and deficits rise. There is no evidence that tax reform raises growth, although it may improve fairness and tax administration.

Oh, and that tired old myth about tax hikes tanking the economy? No dice.

And the Republican idea that tax increases always crash the economy is belied by the experiences after Bill Clinton raised taxes in 1993 and Barack Obama did the same in 2013. The economy grew nicely and the stock market boomed in both cases.

USA Today noted Bruce Bartlett’s piece was adapted from his prepared testimony as a witness at a tax forum held by House Democrats on Wednesday. “Having helped open the Pandora’s Box of Republican tax cutting, I have tried for many years to close it again,” he explained. “I am trying again now.”

It should be noted Bruce Bartlett is a frequent and highly amusing critic of Donald Trump. After Hurricane Maria, he sniped at the White House’s inadequate response.

Puerto Rico is to the US as Tiffany Trump is to Donald Trump.

And he had nothing nice to say the day before, either.

It's a waste of time to read the news anymore. Every day it's the same damn thing–Trump said/did something stupid. Rinse, repeat.

And I checked this week and he’s still at it.

Trump today: "I'm a very intelligent person." Add another one to the long list of Trump lies.

On Sept. 28, after testifying at the Democrats’ tax forum,  Bruce Bartlett appeared on MSBNC’s The Last Word. But first, host Lawrence O’Donnell had some scathing things to say about Donald Trump.

“Massive tax cuts,” Lawrence O’Donnell declared. “That’s what this is about, not tax reform. And the massive tax cuts are going to the people with the massive incomes and the massive wealth.” And despite Donald Trump’s claims that he won’t benefit,  this tax plan has some massive giveaways that would feather the Trump family’s nests, including zero estate taxes for the kids when they inherit. The Last Word‘s host then points out that — unlike Donald Trump —  the past five U.S. presidents have shared their tax returns with the public.

“no president has ever been vulnerable to the accusation that he was trying to cut taxes for his own personal benefit.”

Bruce Bartlett then joined him and noted that unlike this lame attempt at “tax reform,”  “the Reagan effort in 1986 was a very serious and long-term effort.” We may not agree with it, but there was a long process, policy wonks, a three-volume study by the U.S. Treasury, specific recommendations, hearings, and bipartisan input.

“I seriously doubt that Donald Trump has the faintest idea about what is in the package he just proposed today.”

Bruce Bartlett then added today’s GOP took some good ideas on tax reform and got carried away, making “exaggerated arguments” and saying the tax cuts would “pay for themselves with no loss of revenue.”

“And that’s just hogwash. It’s just a lie. And anybody who says it is a liar. And the people who say it know that they’re lying. There’s not a single serious study, there’s no serious studies of anything by this administration or anybody on the Right these days [who] would back up, in the slightest possible way, the talking points that they just continuously throw out there as just propaganda.”

Here’s the video with the entire Last Word episode from MSNBC. If you’d rather cut to the chase, Lawrence O’Donnell’s scathing commentary on Donald Trump and the GOP’s tax plan starts at the 4:20 mark. Bruce Bartlett appears at the 7:36 mark.

Bartlett and McDonnell aren’t the only ones who hate Donald Trump and the GOP’s tax plan. An ABC News poll from Weds. shows only 28 percent of us supporting it.

Bruce Bartlett’s new book, “The Truth Matters: A Citizen’s Guide to Separating Facts from Lies and Stopping Fake News in Its Tracks”  comes out on Oct. 24. “The Benefit and The Burden: Tax Reform-Why We Need It and What It Will Take from 2013” is also well worth a read.

NOTE: Bruce Bartlett says Reaganomics was once a good idea. I think it was always a terrible idea, but am still glad he’s speaking against it now.