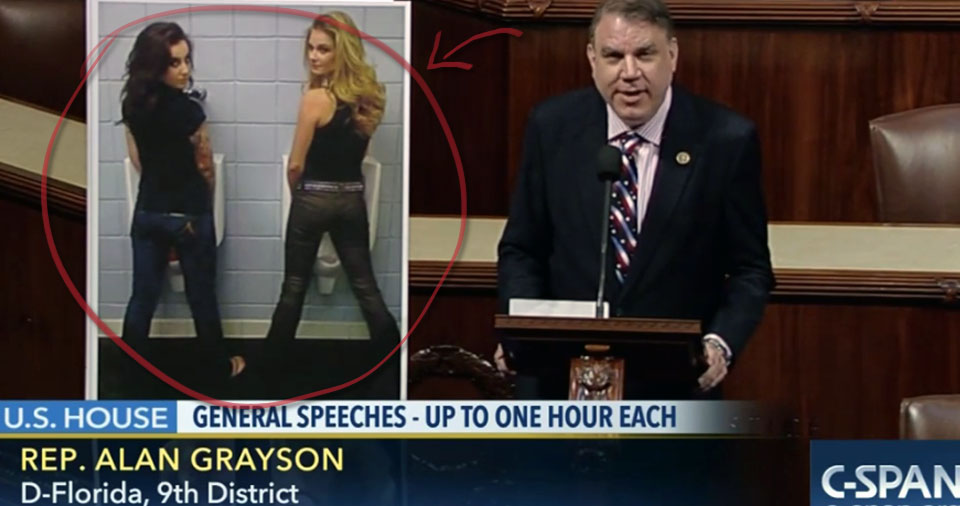 “I rise today to address the great American bathroom controversy,” Rep. Alan Grayson (D-FL) declared from the House floor. CSPAN then caught the fiery progressive in fine fettle as he proceeded to eviscerate his colleagues from the Republican Party for their support of North Carolina’s transgender “Bathroom Bill.”

Alan Grayson motioned towards a blown-up photo next to him and introduced the late Christine Jorgensen, the first widely-known transgender woman. Born in 1926 as George, she grew up in the Bronx like Alan Grayson did, went to the public school where his father taught and was drafted into the US Army for World War II in 1945. She’d always struggled with having the wrong gender identity and travelled to Denmark for estrogen treatments and gender reassignment surgery. In 1953 she made her full transition to her true identity as Christine Jorgensen, made big headlines in the news, and went on to become an entertainer with a popular stage act.

Alan Grayson explained that back in the day, “she was the most famous, if you will, transgender person in America.”

“Christine Jorgensen was out, she was well-known in America as someone who was transgender, I knew about her story when I was growing up in the 1960’s and 1970’s. She made no effort to hide, she didn’t feel any shame about it. In fact, she’s proud of the fact that she’s been able to take advantage of what medicine had to offer, and lived the life that she felt she would have been able to live from the beginning if she’d had the proper gender.”

Of course it may have been easier for Americans to accept her back when it was still seen as okay to make lame transgender jokes. It probably helped that gender conforming folks felt less threatened since LGBT people very kindly and conveniently stayed in the closet. Still, Alan Grayson pointedly mentioned that never once did he ever hear anyone try to dictate what bathroom Christine Jorgensen could use.

Alan Grayson then lights into the GOP over “our great bathroom controversy” with a scathing diatribe against “the more bigoted among us.”

The sharp-tongued congressman pointed out that Christine Jorgensen would have found this situation ironic. Back in the 1950s-1970s, she couldn’t marry her male lover, but she could use any bathroom she wanted.

“We finally managed to solve that problem […] Now we have a whole new problem. Now, thanks to Republicans, bigots in North Carolina, we have a law that would require Christine Jorgensen to go to the men’s room. Think about that.”

Alan Grayson then displays a photo of two women who appear to be peeing in front of urinals in a men’s bathroom and declares:

“In fact, the natural consequence of that law is what I’m about to show you right here.”

By attempting to force people to use the wrong bathroom for the gender they identify with, these transgender bathroom bills are, in fact, an invitation to bully, harass, and/or humiliate transgender people.

Then Alan Grayson utters the magic words we’ve all been thinking:

He adds that that back in the day, if Christine Jorgensen had walked into the men’s room as a woman, he would have found it “odd” but it wouldn’t have occurred to him to hate or discriminate against her. But these bathroom laws not only invite but require insane levels of cruelty towards transgender people.

And whatever happened to the party of “small government,” Alan Grayson asks.

“Do we need a new law on this subject, let alone a stupid law, a bad law, a ridiculous law?”